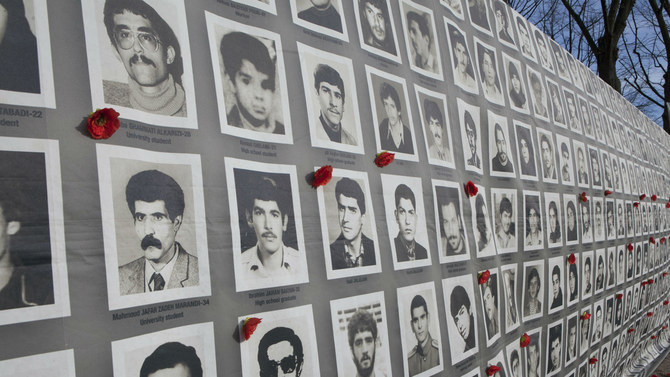 “Overwhelming evidence” points to then-Supreme Leader Ruhollah Khomeini having ordered the mass executions, HRW said, adding that they took place in at least 32 cities and that up to 5,000 prisoners were murdered.

Foreign courts have stepped in to help secure justice for the victims, with a trial in Sweden prosecuting an Iranian accused of involvement in the mass executions.

The trial started in August 2021 and is expected to produce a verdict this year, which HRW said would be “an important development for victims long denied recognition and justice.”

Tara Sepehri Far, senior Iran researcher at HRW, said: “For decades the families of the 1988 mass execution victims have relentlessly pursued truth and justice for their loved ones without success.

“Now that a trial in Sweden has put a renewed spotlight on one of the darkest chapters of Iran’s modern history, it is critical for prosecutors in other countries to pursue justice for these heinous crimes.”

HRW’s in-depth document outlines evidence gathered by survivors and rights groups over decades, with sections dedicated to the senior officials involved in ordering and overseeing the murders, which the Iranian regime has never acknowledged.

Not only has Tehran failed to investigate the mass executions, it has also silenced those who have tried to speak out about them.

HRW noted the case of Ahmed Montazeri — the son of Hussein Ali Montazeri, the deputy supreme leader at the time of the executions — who in 2016 released a tape of senior officials detailing how they were conducted.

The Special Court of Clergy convicted Ahmed of several charges, including “spreading propaganda against the system” and “revealing plans, secrets or decisions regarding the state’s domestic or foreign policies … in a manner amounting to espionage.”

He was sentenced to 21 years’ imprisonment in November 2016, but the sentence was later suspended.

“Available evidence shows that Iranian authorities from July to September 1988 executed thousands of prisoners in violation of their fundamental right to a fair judicial process,” said HRW.

“Under international law, extrajudicial killings and other abuses committed as part of a widespread or systematic attack directed against any civilian population are crimes against humanity.” Human Rights Watch

UN warns of unprecedented hunger worldwide as result of war...