HomeArticleTwin fears for India over the Colombo Port City
Article

Twin fears for India over the Colombo Port City 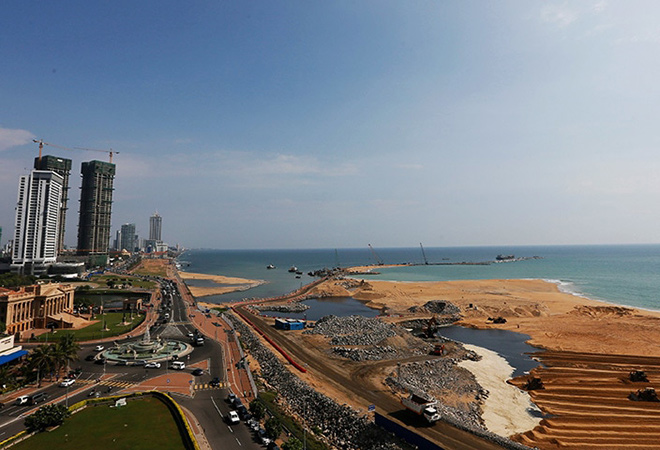 In light of the Sri Lankan Parliament passing a new legislation for China’s near-complete control in an ongoing Special Economic Zone (SEZ) project, neighbouring India has additional causes for concern on the security and economic fronts on this score too, apart from the existing ones from the southern Hambantota Port. While Indian concerns on the security front are obvious, the economic ills befalling the northern neighbour may be hidden until it becomes too late, unless New Delhi applied correctives in non-fashionable areas like job creation and ski training.

The Parliament passed the Port City Bill 148-59 in the 225-member House, after the ruling Rajapaksa dispensation presented an amended bill, to address the concerns numbered in the mandatory pre-passage ‘determination’ by the Supreme Court. The Sri Lankan process can be recommended for nations like India, where passage of bills without obtaining judicial opinion often leads to prolonged litigation later on, thus, defeating the very purpose of such legislation.

In the current instance, the Colombo Port City (CPC) Economic Commission Bill empowers the nation’s President to create a single-window management committee for the SEZ, which is on 269 hectares of reclaimed land along with massive tax and duty concessions for both domestic and foreign investors. After the government went ahead with the amendments without complying to the process of two-thirds vote in the Parliament or a national referendum, some concerns remain over the presidential powers to induct ‘foreigners’ into the management commission.

With the CPC originally planned under the earlier Rajapaksa government of President Mahinda (2005-2015), the current Prime Minister, critics of the incumbent administration of President Gotabaya, the former’s brother, say that the idea was to co-opt China (alone) on the board. From an Indian perspective, the form, content, and spirit of the law goes against the Rajapaksa arguments made for the unilateral cancellation of the predecessor regime’s tri-nation memorandum of cooperation (MoC) with India and Japan for joint development of the Eastern Container Terminal (ECT) in the Colombo Port and also decided against signing the US $480 million investment plans under the ‘Millennium Cooperation Corporation’ (MCC) of the US.

For the Rajapaksas, both the ECT and MCC were legacy issues, inherited from the previous right-liberal government of Prime Minister Ranil Wickremesinghe, who green-flagged the projects without concluding the final agreements. The Rajapaksas had the option of taking either or both of them forward or go back on a sovereign commitment—only because they were ‘non-Chinese’. The on-and off Sri Lankan invitation for Indian pharma companies to set up SEZ units in Sri Lanka over the past one decade has also not come to fruition.

The Rajapaksas had the option of taking either or both of them forward or go back on a sovereign commitment—only because they were ‘non-Chinese’. The on-and off Sri Lankan invitation for Indian pharma companies to set up SEZ units in Sri Lanka over the past one decade has also not come to fruition

Flowing from the ECT-MCC cancellation, Colombo should have celebrated the CPC  as a ‘national asset’ too and stood firmly against ‘foreigners’ on the Port City administration—but that has not been the case. Opposition MPs voted against the bill but still reiterated that it “will catalyse the next phase of growth … we want to make sure that it is done right”.

The Opposition’s doublespeak had become clear even on the Hambantota issue, when then Prime Minister Ranil Wickremesinghe of the United National Party (UNP), blamed the predecessor Rajapaksa regime for pushing the nation into a ‘Chinese debt-trap’, to justify the debt-equity swap-deal and the handing over of the Sri Lankan territory to China—at the same time borrowing on a large scale,  from Beijing to construct highways. The present-day Opposition ‘Samagi Jana Balawegaya’ (SJB) is a breakaway chip of the old block, with not many policy changes despite the ideological orientation of the new leader, Sajith Premadasa. With the result, barring the divided Tamil polity with its own reason, and the inconsequential left-nationalist Janatha Vimukthi Peramuna(JVP), the mainline Opposition has been hunting with the hounds and running with the hare whereever China is involved.

Critics of the Port City idea/law also point out how Sri Lanka was fooled by China’s commitments on annual business and revenues at Hambantota, and the final figures did not measure up. Given similar experiences of other Third World Chinese investment destinations like Mauritius, they are not sure if the Port City will end up as another ‘debt-trap’ of the Hambantota kind, one way or the other.

Given similar experiences of other Third World Chinese investment destinations like Mauritius, they are not sure if the Port City will end up as another ‘debt-trap’ of the Hambantota kind, one way or the other.

Leading the parliamentary debate on the amended CPC bill, Prime Minister Mahinda reiterated the promise of US $ 15-billion investments in five years. Separately, the government representatives told a parliamentary panel that a local investor has brought in US $100-million, though there is no information if he has an overseas finance-partner, and if so, who it might be.

Also, if the government cited stiff opposition from powerful trade unions as the cause for cancelling the ECT deal with India, they are said to have pulled back  only after the Port City proposal promised new jobs in a big way. In his parliamentary intervention, PM Mahinda also reiterated big time job creation—200,000 during CPC construction and 85,000 permanent ones—skilled, semi-skilled, and unskilled, later on. The figure is impressive, as Sri Lankans working elsewhere are expected to return home, if they have not already done so post-pandemic, with their remittances heading the list of forex-earners.

The job figures are the same as in Budget-2021, presented in November last year. It shows how possibly the government has tied its economic hopes and youth aspirations to the CPC, more than any other. But there is a catch.  Speaking on the bill in Parliament, Youth Affairs Minister, Namal Rajapaksa, told the youth that they had to acquire the ‘required skills’ to obtain those Port City jobs. If this was an indication that high-paying, top-rung jobs could still go to the Chinese (or, other foreigners?) on this one criterion, he did not mention it.

Through the past decade and more, China accounts for most of the investments in the country, including those by domestic entrepreneurs. As is their wont, the Chinese brought in all equipment and men from their homeland, thus depriving local enterprises and job seekers any share in their own nation-building and also in the incomes generated. This is saying a lot in terms of Sri Lanka’s continued economic ills, worsened by COVID-19, and at least a part of which the Port City accord seems wanting set right.

As if to address Minister Namal’s concerns even earlier, the opening paragraphs of Budget-2021, presented by PM Mahinda as Finance Minister, focused extensively on skills training for the youth, but without mentioning the Port City as the sole job provider. FDI providers to the region, barring China, would thus be watching the Sri Lankan skills programme keenly as the Indian promise of the past decade of two different regimes has not lived up to the commitments even in a small way. This will come on the top of the effective single-window clearances in Sri Lanka even without the Port City, where again the Indian performance is dismal.

Should the CPC really take off, especially with promised jobs, family incomes, and government revenues, the Rajapaksas’ politico-electoral positions could become unassailable within the country, as much for the next polls as in the recent past. This is different from the ‘friendly competition’ offered by Bangladesh to India, with the former now the fastest-growing economy in these parts.

Should the CPC really take off, especially with promised jobs, family incomes, and government revenues, the Rajapaksas’ politico-electoral positions could become unassailable within the country, as much for the next polls as in the recent past

Coinciding with the Port City Bill’s passage and without naming China, President Gotabaya reiterated that “no one will be allowed to jeopardise the security of India”. Addressing the 26th international conference on ‘The Future of Asia’, organised by the Nikkei Forum from Tokyo, he said, “We understand their (India’s) security concerns and sensitivities … We will work closely with India and all regional partners to ensure that the Indian Ocean remains secure for the benefit of all countries.”

Gotabaya also reiterated that Sri Lanka will continue to forge economic ties with China and defended the Hambantota project, whose swap-deal he had unilaterally proposed to cancel at one time, but explained it away as a ‘commercial deal’ after coming to power. It remains unexplained as to why but the SJB/UNP Opposition, the only other political grouping with hopes of returning to power sometime in the future, too shares this view, overall. However, their commitments on the ‘security front’ sounds less hollow than that of the Rajapaksas, at least on paper—as no real issue had cropped up for New Delhi to test either, when it was in power.

President Gotabaya’s reiteration of security commitments to India has to be seen in the context of the tri-lateral meeting of the National Security Advisors (NSA), including Maldives, in December last year, when they broad-based and upgraded the moribund ‘Maritime Security Agreement’ to ‘Maritime and Security Agreement’, with Colombo as the seat of its secretariat. In turn, it was also a take-off from Gotabaya’s Foreign Secretary, retired navy admiral, Jayanth Colombage’s stand who propounded an ‘India First’, foreign and security policy, in August 2019. Yet, there is no denying the continued Indian apprehensions over the constant ‘shifting of goal-posts’ by Sri Lanka, be it on the economic or the security front.Orofline.org 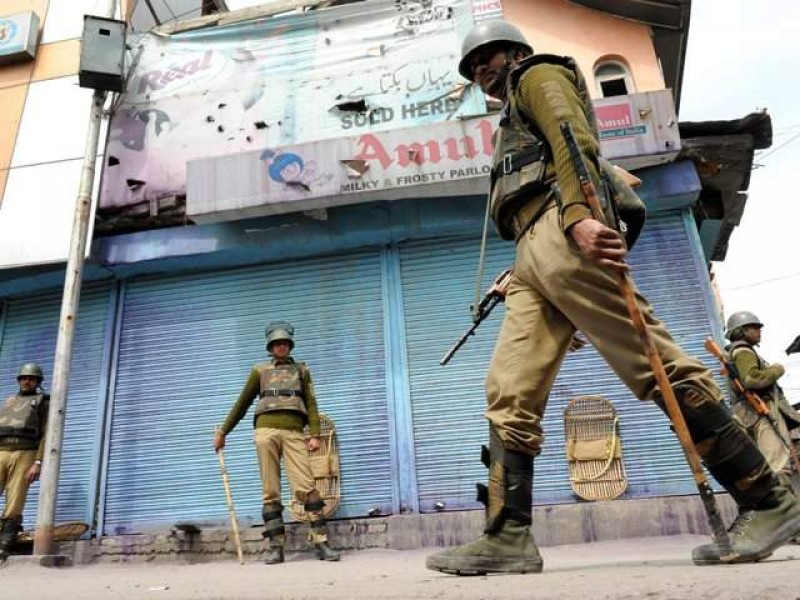 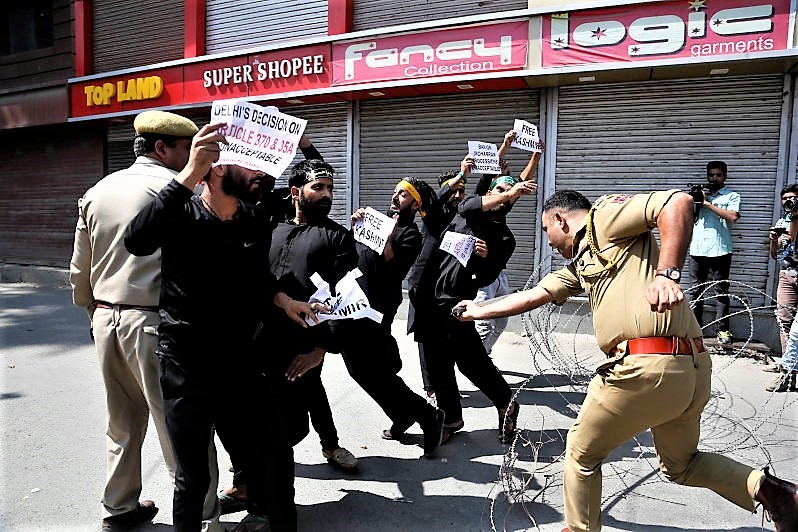