HomeLatest NewsWho were the victims of the truck attack on Pakistani family in Canada?
Latest News

Who were the victims of the truck attack on Pakistani family in Canada? 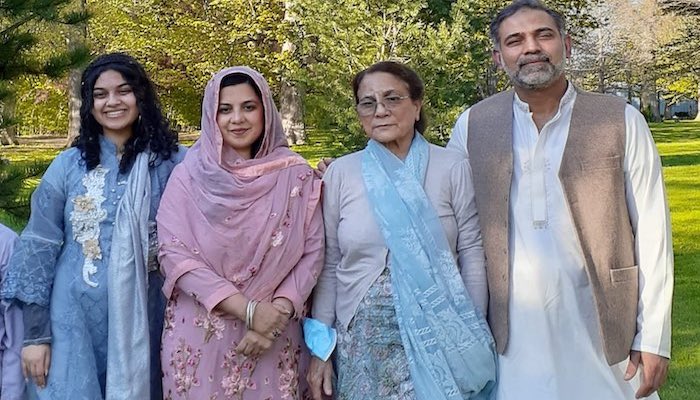 Ontario: A mother who was a “brilliant scholar,” a cricket-loving father with “a welcoming smile,” a teenage daughter who was “a friend to many”; a doting grandmother: the victims of Sunday’s truck-ramming attack in Canada, all Muslims with roots in Pakistan, were a “model family,” friends say.

The attack, dubbed a “terrorist” act by Prime Minister Justin Trudeau, came out of the blue as the Afzaal family, taking one of the evening strolls they so loved, prepared to cross a street in the Ontario city of London.

The lives of three generations were snuffed out in a moment: Madiha Salman, age 44, who was doing postgraduate work in civil and environmental engineering; her 46-year-old husband, Salman Afzaal, who loved to greet people at the mosque; their 15-year-old daughter, Yumna Salman; and Afzaal’s 74-year-old mother, who has not been named.

The couple’s son, nine-year-old Fayez, was instantly orphaned. He remains in hospital with serious injuries but is recovering, relatives said.

Kira Stephani speaks with her daughters Aisha Sayyed (front) and Aliyah Sayyed at a makeshift memorial at the fatal crime scene where a man driving a pickup truck jumped the curb and ran over a Muslim family in London, Ontario. Photo: Reuters

What had been an ordinary evening for the Afzaals was brutally cut short when a black pickup truck, driven by a 20-year-old suspect, took deliberate aim at them, jumping a curb and mowing them down.

The attack, in this city of 500,000 some 200 kilometers (125 miles) southwest of Toronto, sparked anger and disbelief over another senseless attack on ordinary Canadian Muslims.

“Everyone who knew Salman and the rest of the Afzaal family knew the model family they were, as Muslims, Canadians and Pakistanis,” said a statement from their relatives. “They were always there giving and participating in spreading goodness.”

All were hard workers, and the children were “top students,” it said.

Here is a brief profile of the family.

Madiha Salman, 44, was finishing her doctorate at Western University in London. She had arrived in Canada in 2007 after completing studies in civil engineering and the environment in Pakistan.

She was “a brilliant scholar and a caring mother and friend,” her friends wrote on a GoFundMe page that has so far raised Can$470,000 Canadian to support Fayez and the broader Pakistani community in London.

The London mosque and the National Council of Canadian Muslims have separately raised more than Can$785,000 on the LaunchGood platform, while a fund-raising effort by a Muslim association at Western University has taken in Can$700,000.

Madiha Salman’s Facebook page features pictures of her smiling children and of gifts they had made her for Mother’s Day.

Husband Salman Afzaal, 46, was a “beloved member of the London community. Whether at his local cricket matches or at the Masjid (mosque) the first thing to greet you would be his gentle and welcoming smile,” the GoFundMe post said.

Daughter Yumna, a ninth grader, was “a loving friend to many.”

Yumna studied at Oakridge Secondary School, where she became a student in 2020 after graduating from the London Islamic School, reported CBC News.

Hassan Moostafa knew the family well and said his daughter was good friends with Yumna.

The publication reported him as saying that Yumna painted a large mural inside the school’s hallway. The floor-to-ceiling mural features an image of the Earth floating in space beside the words: “Learn, Lead, Inspire.”

Beside the image of the Earth, the mural has the following message: “Shoot for the moon, even if you miss, you’ll land among the stars.”

Asad Choudhary, principal of the London Islamic school, said staff and students are praying for Yumna and her brother.

“Great kids, role-model students,” said Choudhary. “Definitely gems of our school community. Both of them are good friends, of not just their classmates, but the school community at large. Very talented in their academics.”

And Salman’s mother, whose name has not been released, was “a pillar of their family” — someone who “cherished their daily walks.” AFP