Kashmiris protest on the eve of G7 summit 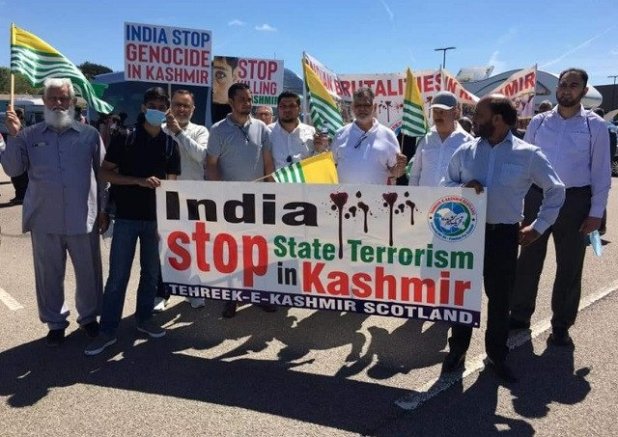 London: Hundreds of people from different walks of life, including human rights activists, protested outside the main Group of 7 industrialised nations summit meeting in Cornwall, condemning the killing and arrests of political leadersin Indian Illegally Occupied Jammu and Kashmir (IIOJK).

The protesters, who came from the different parts of United Kingdom, staged the demonstration in favour of the people of Kashmir and Palestine. It was jointly led by the Tehreek-e-Kashmir (TeK) UK, Resist G7 Coalition, Palestine Solidarity Campaign, Trade Unions and climate change groups.The protest was held as G7 leaders gathered for their summit meeting in the UK after a gap of two years. India Prime Minister Narendra Modi has also been invited to the summit, who will address the meeting via a video link, according to reports.

Raising slogans like ‘Go India go back’, ‘Stop human rights violations in Kashmir, ‘Free Palestine and ‘Implement UN resolutions on Kashmir’, they demanded of the world leaders to grant the right to self-determination of the people in occupied territories.

“India has turned IIOJK into a concentration camp and has made life of the Kashmiri people hell. Children are main victims at the hands of Indian army since 1989,” TeK UK President Raja Fahim Kayani said, while addressing the protesters.

“Let us remind [the world leaders] that Kashmiris have been denied their right to self-determination promised by these countries in 1948. Kashmir is the oldest unresolved issue at the United Nations and the people of Kashmir are being punished by India army for asking for their rights,” he added.

“Your business interests have made you blind. Come and stand for justice, human rights and basic right to self-determination for the people of Kashmir,” Kayani said. Your silence has made you complicit in India’s colonialism.”

Kayani further said that India was openly violating the Geneva Conventions by removing locals and settling non-locals, in IIOJK to alter the demography of the region. “Kashmir is a Muslim majority region and India is changing its demography,” he said.

“More than half a million people have been killed in IIOJK in the last 73 years. Indian military has occupied fertile lands, orchards, fresh water sources. India is not only committing war crimes again humanity but also committing environmental terrorism.”

“The world must prevent a demographic terrorism in Kashmir. It is time to stand up against India’s colonialism and hold New Delhi accountable for its war crimes and human rights abuses in Kashmir, Kayani concluded. The Express Tribune