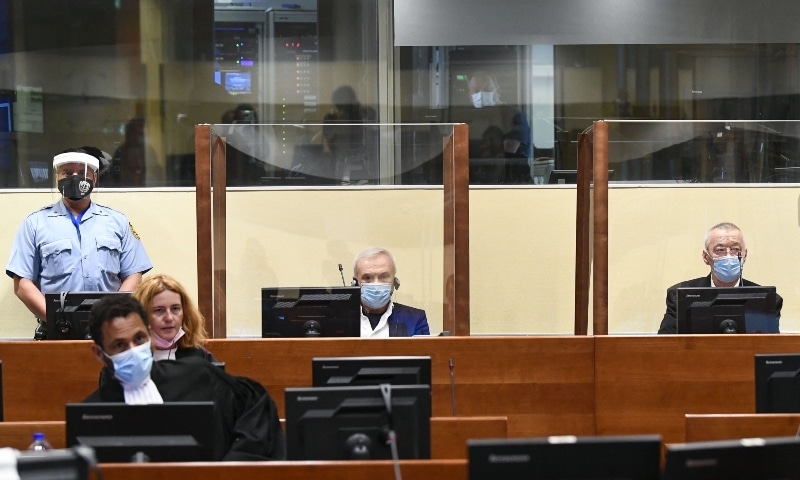 The Hague: Two former Serbian spy chiefs in Slobodan Milosevic’s regime were convicted after a retrial by a UN court of war crimes and crimes against humanity in the 1990s Balkans conflict.

Jovica Stanisic, 70, the former head of Serbia’s state security service, and his deputy Franko Simatovic, 71, were each sentenced to 12 years in jail for backing a Serb death squad that terrorised Muslims and Croats in a Bosnian town in 1992.

But The Hague court — which initially acquitted the pair in 2013 before ordering a retrial — said there was not enough evidence to support allegations that they were responsible for wider atrocities across Bosnia and Croatia.

The case was one of the last left over from the wars that tore apart Yugoslavia after the fall of communism, after former Bosnian Serb military chief Ratko Mladic had his life sentence for genocide upheld earlier in June.

Chief Judge Burton Hall said the court “finds Jovica Stanisic and Franko Simatovic guilty” of the war crime of murder, and the crimes against humanity of murder, persecution, forcible transfer and deportation.

Munira Subasic, president of one of the “Mothers of Srebrenica” associations that campaigns for justice for victims of the 1995 massacre of some 8,000 Muslim men and boys, said that “this judgement will do justice to the victims of Bosnia.” “The victims are never satisfied but it’s important that they have been found guilty, even if it is just for the crimes committed at Bosanski Samac,” she separately told local television.

The court said the pair helped train and deploy Serb forces and local Serbs during the takeover of Bosanski Samac in April 1992, “which had a substantial effect on the commission of the crimes”, the court said.

Serb forces launched a “campaign of terror” to drive out non-Serbs involving rapes, looting and the destruction of religious buildings in the town, as well as holding Bosnian Muslims and Croats in six detention centres, the court said.

“Detainees were kept in inhumane conditions, and were subjected to forced labour, severe mistreatment, repeated beatings, and torture, forced to engage in sexual acts, and killed,” the judgment said. Sixteen men were killed in one specific incident in May 1992, it said.

The court said that Stanisic and Simatovic were “criminally responsible for aiding and abetting” the crimes in the town but that it “does not find the accused responsible for planning, ordering, or aiding and abetting any other charged crime.” Prosecutors had also alleged that Stanisic and Simatovic were part of a joint criminal enterprise that included the late Serbian president Milosevic, who died in The Hague in 2006, and Bosnian Serb leader Radovan Karadzic, also serving a life sentence.

They argued they backed notorious paramilitary groups including an elite Serbian unit dubbed the “Red Berets” and the feared “Tigers” outfit run by Zeljko “Arkan” Raznatovic.

But the court said that while the pair were “aware of the campaign of murder, persecution, and forcible displacement” to drive non-Serbs out of Croatia and Bosnia, the prosecution had not proved beyond reasonable doubt that they were part of the plan.

Stanisic and Simatovic were initially acquitted in 2013, by the International Criminal Tribunal for the former Yugoslavia (ICTY) in The Hague, when judges said it could not be proved they gave units specific orders. AFP

Cross-border aid to Syria will end, says Russian ambassador to...