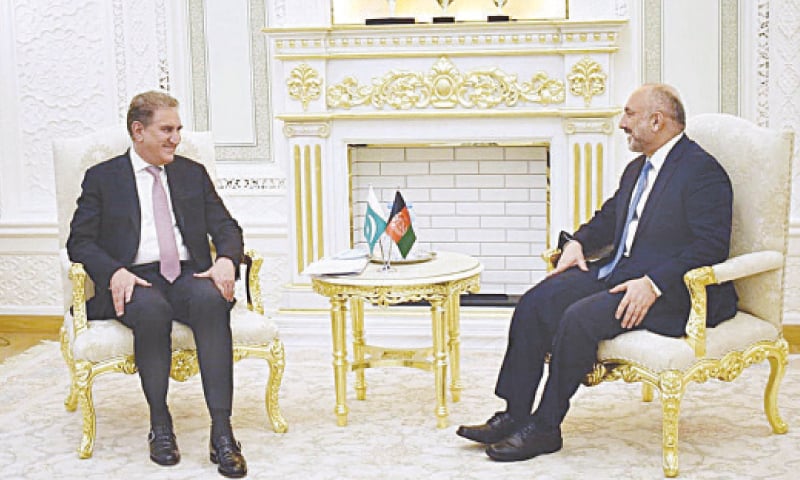 Islamabad: Ahead of a fresh push by Afghan politicians to break the stalemate in Afghan peace talks, Pakistan once again urged Kabul and the Taliban leadership to show flexibility by agreeing to a political settlement so that further violence and bloodshed could be avoided.

This message was conveyed by Foreign Minister Shah Mahmood Qureshi to his Afghan counterpart Hanif Atmar during a meeting on the sidelines of Shanghai Cooperation Organisation’s Council of Foreign Ministers in Dushanbe.

“In view of the withdrawal of international forces from Afghanistan, the foreign minister urged the Afghan leaders to achieve a negotiated political settlement at the earliest, adding that such an outcome would bring peace, stability and prosperity in Afghanistan,” FO spokesman’s office said in a statement.

Fighting between Taliban insurgents and Afghan government forces has escalated since the foreign forces began pulling out on May 1. The withdrawal is scheduled to be completed by Aug 31.

The Taliban have made huge territorial gains over the past couple of months, suggesting that they intend to take Kabul by force after the completion of withdrawal despite commitments given to the outside world of not doing so.

Mr Qureshi’s fresh call comes amidst intensified diplomatic efforts to end the stalemate in Afghan peace talks in Doha and an upcoming meeting between leading Afghan political leaders and the insurgents in the next few days. The meeting is expected later in the week in Doha.

Mr Qureshi underscored the need for Afghan leaders to seize the historic opportunity and take advantage of international convergence on the final settlement of the Afghan conflict by working together an inclusive, broad-based and comprehensive political settlement.

He expressed concern about the high level of violence and called for immediate steps for decreasing it, leading to a comprehensive ceasefire.

“The path ahead is ultimately determined by Afghan leaders from whom flexibility is essential to achieve a negotiated settlement and any blame games are detrimental to the peace process. Neither Pakistan nor the int’l community nor indeed people of Afghanistan wish for a repeat of civil war,” Mr Qureshi tweeted after the meeting.

The foreign minister also protested over the negative statements made by Afghan leaders against Pakistan. He told Mr Atmar that neither would the blame game cloud Pakistan’s positive contribution to the Afghan peace process nor would it serve the region.

He called for addressing the concerns through established institutional mechanisms, including the Afghanistan-Pakistan Action Plan for Peace and Solidarity (APAPPS). Pakistan, he said, was looking forward to hosting review meeting of APAPPS in Islamabad at the earliest. APP

Campaigners hail end of opencast coalmines in UK after latest...

UK will work with Taliban should they come to power:...