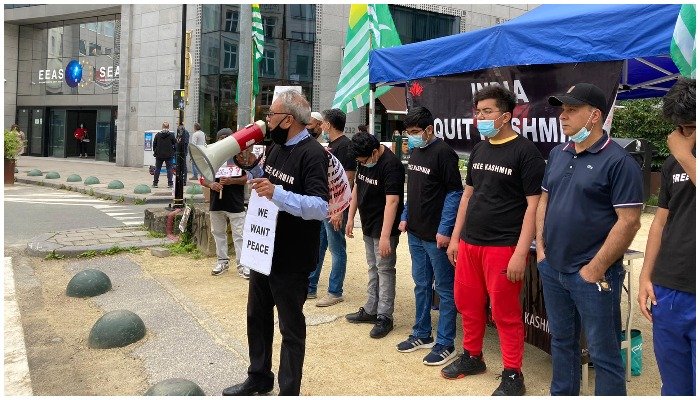 Brussels:  Participants of a protest camp in Brussels called upon the European Parliament to play its role in ending the atrocities committed by the Indian forces in the Indian Occupied Jammu and Kashmir (IOJK), especially violence against the Kashmiri children.

The protesters handed over a petition to the European Union officials at the EU External Action Service at end of the one-day protest camp today. The camp was organised by Kashmir Council Europe (KC-EU) on the occasion of martyrdom day in remembrance of the martyrs of July 13, 1931, in Srinagar.

It is important to mention that on July 13, 1931, thousands of Kashmiris flocked to the central jail in Srinagar to see the trial of a Kashmiri namely Abdul Qadeer. Then Dogra ruler of Jammu and Kashmir ordered his soldiers to open fire on them. As a result, a total of 22 Kashmiris died.

The protest camp today was held in front of the EU External Action Service (EEAS) in Brussels, the European headquarters.

Addressing the EU, the memorandum (petition) asked it to play its role in the implementation of the United Nations Security Council resolutions, and the United Nations’ Universal Declaration of Human Rights, giving Kashmiris the right to self-determination. It called for the withdrawal of the Indian occupation forces, an end to its state terrorism, genocidal repression, ethnic cleansing, rape, gang rape, torture, and degrading treatment towards Kashmiri men, women, and children.

The petition also called for the unconditional release of all those imprisoned in Indian jails, including political figures, in connection with the resistance they showed to the Indian occupation forces. It also sought permission for major human rights NGOs, and other human rights organisations to gain access to the state of Jammu and Kashmir.

It is important to mention that according to a recent UN report, the United Nations Secretary-General (UNSG) Antonio Guterres has expressed concern over “grave violations” of human rights against children in IOJK and has asked the Indian government to end the use of shotgun pellets against children.

Kashmir Council EU will also arrange a protest in front of the Indian embassy in Brussels on August 5, 2021. It was on that day in 2019 when Indian Prime Minister Narendra Modi’s regime revoked articles 370 and 35A from its constitution and annulled the special constitutional status of Jammu and Kashmir. Web Desk

Dalit youth beaten up by upper caste Hindus in UP’s...