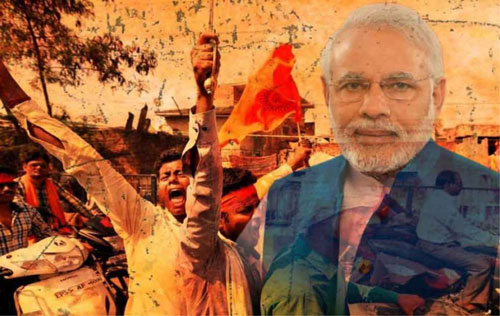 Srinagar: Hindutva ideology is being promoted under the patronage of Modi-led fascist Indian regime as it is fanning the flames of religious extremism and terrorism in India.

According to a report, Hindutva ideology, being espoused by Modi, is a form of religious terrorism.

The report further stated that the oppression being carried out in Indian illegally occupied Jammu and Kashmir (IIOJK) is a practical manifestation of the Hindutva ideology.

It said, history of BJP and other right-wing Hindu organizations is deeply rooted in violence and bigotry and since coming to power, the BJP has unleashed violence against India’s religious minori-ties, especially Muslims. Modi led BJP-regime is busy enacting legislations that discriminates against Muslims, it deplored.

The report said, RSS-backed Indian regime is using extreme force to silent dissent in India, add-ing, Sangh Parivar activists have been given a free hand to implement their Hindutva agenda in India.

It said, BJP is working to make India a Hindu state where minorities will be forced to live as sec-ond class citizens.

Hindutva activists are using vio-lence to impose Hindu culture on religious minori-ties across India, it maintained.

The report said, in Modi’s India, Muslims are being attacked even lynched by Sangh Parivar activists in the name of protecting cows.

The report pointed out the Indian government and its judiciary are shielding groups sympathetic to its Hindu-nationalist agenda and the world must come forward to confront Hindutva terrorism.

It said, in complete disregard to the freedom of con-science and the right of all individuals to freely profess, practice, and propagate religion, the BJP-backed administration in Indian illegally occupied Jammu and Kashmir (IIOJK) had planned to put a blanket ban on slaughter of bovines during forth-coming Eid-ul-Azha. Web Desk