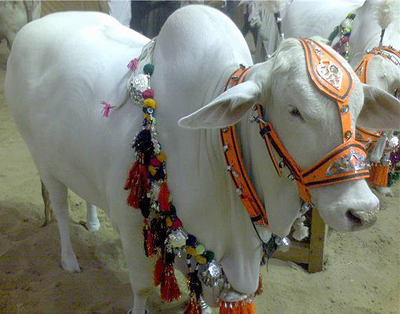 Srinagar: Slaughter of cows, calves and camels on Muslim festival Eid al-Azha has been banned in the Indian administered Kashmir

An order issued by the Animal Husbandry Department and addressed to the police chief for 97% Muslim Kashmir valley, and its divisional commissioner, has asked officials to stop “illegal killing/sacrifice” of cows, calves, camels and other animals besides taking legal action against those transporting these animals and “violating rules on Eid”.

The order said that a large number of sacrificial animals are likely to be slaughtered on the festival of sacrifice. “In view of animal welfare, the Animal Husbandry Ministry of the government of India has requested for implementation of precautionary measures to strictly implement the animal welfare laws such as Prevention of Cruelty to Animals, Transport of Animals Welfare Rules…,” the order reads. An overwhelming majority of Kashmir Muslims slaughter and eat sheep or goat on Eid. Although the slaughter of cows, calves and bulls stands officially banned, hundreds of meat shops sell beef and buffalo meat. The practice of sacrificing bovine animals was, until a few decades ago, prevalent in rural areas but catching up in the capital Srinagar too. Only a small number of camels are sacrificed and their slaughter on Eid is a relatively new practice.

The fresh order is apparently aimed at placating the sentiments of the Hindus in the region, who are a minority as a whole (28-30%), but a majority in Jammu region, the voter base of India’s ruling Hindu supremacist government. On June 23, a 24-year-old Muslim man, Aijaz Ahmad Dar, was lynched by a group of four Hindu men when he was returning home with a buffalo in Rajouri. Local protesters called the accused as “cow vigilantes”, a term used across India for Hindu men who hunt down, and occasionally lynch, those carrying cattle.  Web Desk

Russia offered US use of Central Asia bases for Afghan...