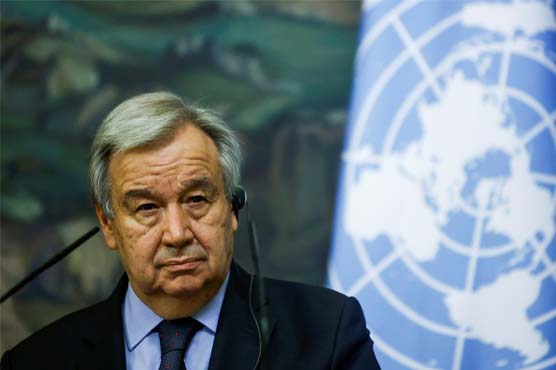 United Nations: United Nations (UN) Secretary-General Antonio Guterres is “encouraged” by the agreement between the Afghan government and the Taliban to expedite peace talks, according to Deputy Spokesman Farhan Aziz Haq.

“The secretary-general is encouraged by the joint declaration issued in Doha, Qatar, on Sunday, under which the two sides agreed to accelerate their high-level engagements in order to find a ‘timely and just solution’ to the conflict,” the spokesman said in response to a question.

In this regard, the UN chief echoed the joint statement issued on Monday by the diplomatic missions of 15 countries, NATO and the European Union to Afghanistan calling for the end to violence, a permanent and comprehensive cease-fire and meaningful peace negotiations.

“The secretary-general underscores the importance of reaching, as a matter of urgency, a negotiated settlement that responds to the needs of all Afghan men and women,” the spokesman said.

Guterres urged the parties to make good on their commitment to accelerate negotiations and meeting the humanitarian needs of the population.

He also called on the international community to unite its efforts in support of the peace process.

“The Secretary-General hopes the Eidul Azha holiday will be celebrated in peace in Afghanistan,” the spokesman added. AFP