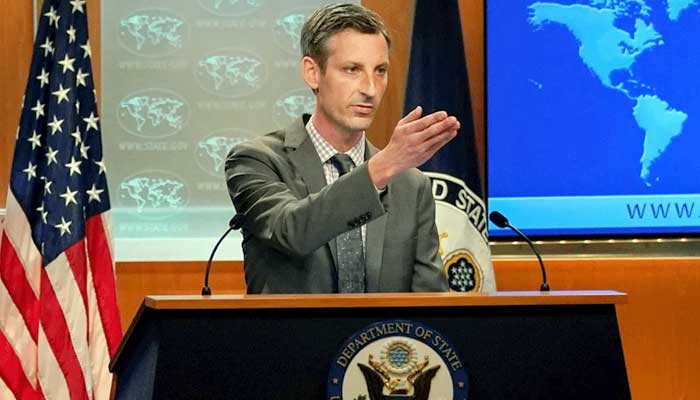 Washington: A couple of days after India admitted to its negative role in keeping Pakistan on the grey list of the Financial Action Task Force (FATF), the US has said that Pakistan has made “significant progress” on its first action plan with 26 of 27 actions items “largely addressed”.

During a regular press briefing, State Department Spokesperson Ned Price said “we do recognize, and we support Pakistan’s continued efforts to satisfy those obligations.”

The State Department spokesperson was asked to comment on Foreign Minister Shah Mahmood Qureshi’s statement over Indian External Affairs Minister S Jaishankar’s admission that Pakistan is on the FATF grey list because of the “efforts of Narendra Modi’s government.”

Price said that the US encourages Pakistan to continue working with the FATF and the international community to swiftly complete the remaining action item by demonstrating that terrorism financing, investigations, and prosecutions target senior leaders and commanders of UN-designated groups.

“We do further encourage Pakistan to expeditiously implement its new second action plan.”

The State Department was also asked to speak on the issue of the alleged abduction of the daughter of Afghanistan’s envoy to Pakistan after Kabul recalled its senior diplomats from Islamabad.

“Afghanistan’s neighbours do have a role to play. I would add that tangible and material support for the Afghanistan peace process is vital for its ultimate success, as are the longer-term relations between Afghanistan and Pakistan,” he said.

He added that the US certainly do hope to see Afghanistan’s neighbours play a constructive, responsible role in bringing about a just and durable solution here. “We understand the crucial role that Pakistan has the potential to play in this regard as well.” AFP