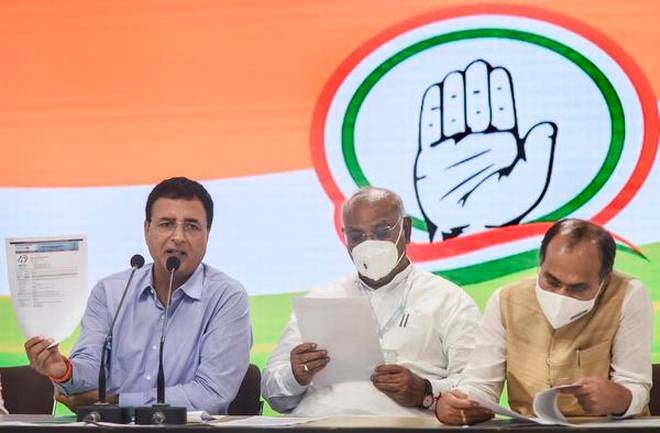 New Delhi: The Congress accused the Narendra Modi government of ‘treason’ and compromising national security reports of Pegasus software being used to spy on people and demanded the dismissal of Home Minister Amit Shah and an inquiry into the role of the Prime Minister.

Terming Information Technology Minister Ashwini Vaishnaw’s statement in the Lok Sabha as ambiguous and rounadabout, party’s parliamentary leaders said they will demanded a debate on the floor and jointly formulate strategy with other Opposition parties.

“The person responsible for deployment of this illegal spyware Pegasus is no less than the Home Minister, who must be sacked,” Mr Surjewala said, adding, :Our first demand is the immediate sacking of Minister of Home and Internal security Amit Shah and a probe into the role of the Prime Minister in the matter”.

Targeting the Home Minister, Mr Kharge said, “If you can’t run the office you hold as per the rule of law, then you should be occupying such an office”. Mr Chowdhury said “Modiji promotes Digital India, but what we are seeing is Surveillance India”.

“Is spying on India’s security forces, judiciary, Cabinet Ministers, Opposition leaders, journalists and other activists through a foreign entity’s spyware not ‘treason’ and an inexcusable breach of national security?” Mr Surjewala asked.

The party also contended the claim made by the IT Minister that illegal surveillance was not possible by stating that the former IT minister Ravi Shankar Prasad, on November 28, 2019 in a reply to a Call Attention motion in the Rajya Sabha, had admitted that there were 121 names where possibly WhatsApp was infected due to the software and that a notice has been issued to NSO, the company that produces the spyware.

“The Constitution has been trampled upon, the rule of law has been murdered, and the oath of office that the prime minister, the home minister and this government took lies in tatters,” Mr Surjewala said.

Chairman of the Parliamentary Committee on IT Shashi Tharoor tweeted, “If GOI did it that’s very bad; if somebody unauthorized did it, that’s worse. If a foreign government say China or Pakistan did it, then national security demands that our government should investigate and this is why an independent investigation is absolutely indispensable”.

Targeting Mr Vaishnaw for starting his innings on the wrong foot, former union minister P Chidambaram tweeted, “The Minister should answer a simple question: Did the government acquire the Pegasus software/spyware?” The Hindu