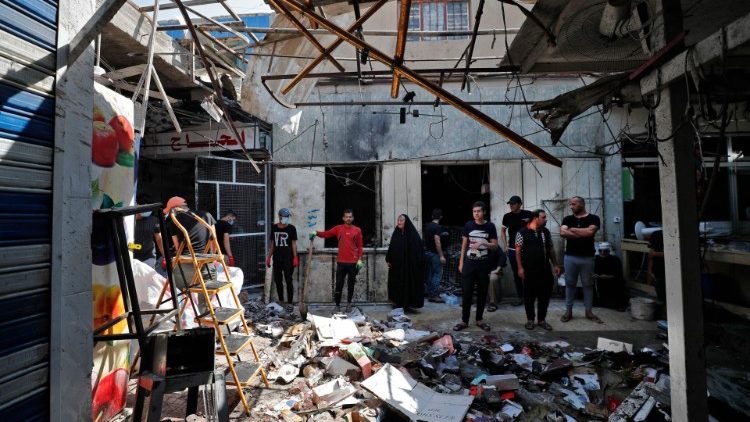 Vatican City: “His Holiness Pope Francis was deeply saddened to learn of the loss of life in the explosion at the Al-Wuhailat market in Baghdad”.

This was how the telegram sent by Cardinal Secretary of State Pietro Parolin on behalf of Pope Francis to the Apostolic Nuncio in Iraq, Archbishop Mitja Leskovar, began.

The telegram continued: “He sends condolences to the families and friends of those who have died, entrusting their souls to the mercy of Almighty God”.

Finally, the telegram conveyed the message that “His Holiness renews his fervent prayers that no act of violence will diminish the efforts of those who strive to promote reconciliation and peace in Iraq”.

A bomb exploded on Tuesday as shoppers were obtaining what they needed for the festival of Eid al-Adha in a market in the northern Sadr City area in the capital city of Iraq. Reports estimate that 30 people have died as a result, and dozens more were wounded. This was the deadliest such attack in Baghdad in the past six months.

Pope Francis visited Iraq in March earlier this year. In a video message sent before his trip, Pope Francis said: “I come as a pilgrim, as a penitent pilgrim to implore forgiveness and reconciliation from the Lord after years of war and terrorism, to ask God for the consolation of hearts and the healing of wounds”.

In Mosul, he prayed a prayer in suffrage for all the victims of the ongoing violence in Iraq, saying its diverse religious and cultural fabric “is weakened by the loss of any of its members, however small”. His prayer uttered there echoes once again:

“To you we entrust all those whose span of earthly life was cut short by the violent hand of their brothers and sisters; we also pray to you for those who caused such harm to their brothers and sisters. May they repent, touched by the power of your mercy. “Eternal rest grant unto them, O Lord, and let perpetual light shine upon them. “May they rest in peace. Amen.” Vatican News

Cost of putting Pegasus in phones runs into crores: Indian...