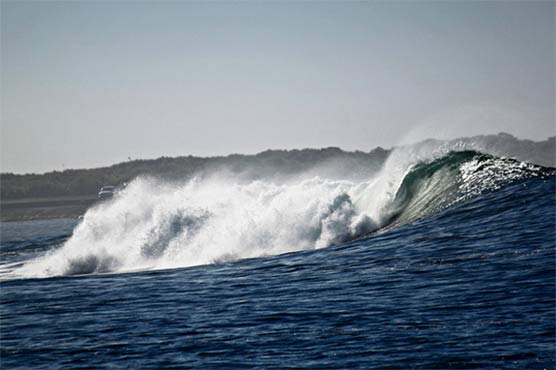 The earthquake hit 56 miles (91 kilometers) southeast of the town of Perryville, the USGS said. The US government issued a tsunami warning for south Alaska and the Alaskan peninsula.

“Hazardous tsunami waves for this earthquake are possible within the next three hours along some coasts,” the US Tsunami Warning System said in a statement. Perryville is a small village about 500 miles from Anchorage, Alaska’s biggest city.

Tsunami warning sirens could be heard on Kodiak, an island with a population of about 6,000 people, along Alaska’s coastline. The quake struck at 10:15 pm Wednesday (0615 GMT Thursday).

A broadcaster on local radio station KMXT said a tsunami, if it was generated, would hit Kodiak at 11:55 pm.

Videos posted on social media by journalists and residents in Kodiak showed people driving away from the coast as warning sirens could be heard.

A tsunami watch was also issued for Hawaii, meaning residents are required to stay away from beaches.

Five aftershocks were recorded within 90 minutes of the earthquake, the largest with a magnitude of 6.2, according to the USGS.

Alaska is part of the seismically active Pacific Ring of Fire.

Alaska was hit by a 9.2-magnitude earthquake in March 1964, the strongest ever recorded in North America.

It devastated Anchorage and unleashed a tsunami that slammed the Gulf of Alaska, the US west coast, and Hawaii.

More than 250 people were killed by the quake and the tsunami.

A 7.5 magnitude earthquake also caused tsunami waves in Alaska’s southern coast in October, but no casualties were reported.  Reuters

England to allow unquarantined travel from US and EU if...

China urges Afghan Taliban to cut ties with all terrorists