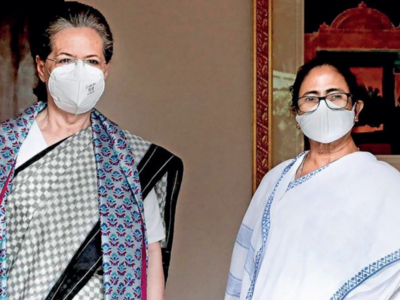 New Delhi: West Bengal chief minister Mamata Banerjee met Congress president Sonia Gandhi at her residence for the first time since the two parties fought as rivals in the assembly elections, as the Trinamool chief said there will be efforts for unified opposition to take on BJP.

The meeting between the two leaders is a part of Banerjee’s series of outreach meetings in the national capital, including those with Congress leaders Kamal Nath, Abhishek Manu Singhvi and Anand Sharma a day before.

“It was a very good meeting,” Banerjee said after the visit to 10 Janpath. Opposition leaders were likely to meet after Parliament’s monsoon session, she said, hoping for “a positive outcome”. The comments are significant as Mamata’s ties with Sonia have been frosty for long, with the CM often accusing Congress of acting in a provocative manner. Ahead of the 2019 election, she had said as much to Sonia during a chance meeting in the Central Hall of Parliament.

Congress sources said Sonia and Mamata had “free and fair discussions” on all issues in the country and issues inside Parliament. They also discussed how institutions were under attack under the Modi government. Sources said the two leaders share personal equations and this resulted in a meeting where no decisions were taken.

“I am not a political astrologer,” the Bengal CM said when asked whether she would lead a coalition of opposition parties. “It depends on the situation, structure. I have no problem if someone else leads (it). I can’t impose (my will),” she added. “I have a sweet home in Bengal. I will stay there and do not plan to shift to Delhi now,” Banerjee said adding: “I am nothing alone, everyone has to unite. I am not a leader but a cadre… a person on the street”.

Rahul Gandhi was also present at the meeting at 10, Janpath. Describing the meeting as “very positive”, Banerjee said she discussed the present political situation in the country, the Covid situation as well as opposition unity with the Congress leadership.

Banerjee said she met Sonia Gandhi because she had invited her for tea at her residence. “Rahul Ji was also there during the meeting. We discussed the country’s political situation in general.”

On the Pegasus snooping issue, she said, “The snooping controversy and the Covid situation also came up for discussion with Sonia Gandhi. The government should reply on this issue in Parliament.” Asked about PM Narendra Modi’s allegation that opposition parties were not allowing Parliament to function, Banerjee said, “Why does the government not answer our question on the Pegasus controversy? If debates and discussions won’t happen in Parliament, then where would they take place?”

Challenging the PM and BJP, Banerjee said the 2024 Lok Sabha elections will see Modi pitted against the entire country. Asked whether opposition parties will campaign together for the coming round of assembly polls, she said the strategy would be chalked after the monsoon session.

On how the opposition will counter PM Modi’s popularity, Banerjee said, “There were days when Modi was popular, you will see today if there is a survey it is not the same. Bodies have been floating in Ganga… no last rites were performed we believe in the dignity of the dead as much as dignity in life. you think those who were affected by this will vote for him?” Times of India

India: Protests holds as result of the ‘Untouchability Wall’ built...