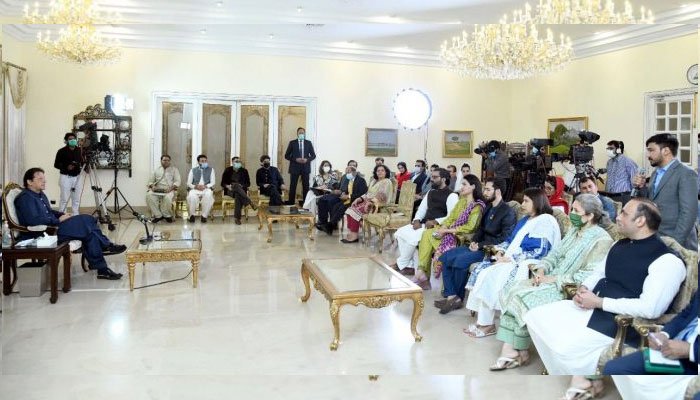 Islamabad: Prime Minister Imran Khan said that as peace in Afghanistan will give Pakistan access to the Central Asian Republics (CARs), it wanted peace there more than any other country in the world.

“We have already signed an agreement with Uzbekistan for a railway line from Mazar Sharif to Peshawar, which will reach Pakistan via Afghanistan,” he said.

The Prime Minister expressed these views while talking to a delegation of the Pak-Afghan Youth Forum (PAYF).

The meeting aimed to present the government’s view in response to the questions raised by the members of PAYF about Pakistan-Afghanistan relations, Pakistan’s efforts for sustainable peace in Afghanistan as well as the overall situation in the region.

To a question, the Prime Minister said that India, through its unilateral August 5, 2019 action, violated the United Nations resolutions and changed the status of Indian Illegally Occupied Jammu and Kashmir (IIOJK). Besides that, he said, India opened a new chapter of atrocities and brutalities against the Kashmiris.

The Prime Minister said that Pakistan has been raising its voice since 1948 for the protection of the rights of Kashmiris at the international level.

He said Pakistan will neither hold any talks with India nor will it accept Indian participation in the Afghan peace process till the August 5, 2019 action was reversed and the status of Occupied Kashmir was restored under which the Kashmiris had the right of self-determination as per UN Resolutions.

The premier said he recently visited Afghanistan and had good relations with President Ashraf Ghani.

He, however, added that recent statements from Afghan leaders blaming Pakistan for the Afghan crisis was unfortunate because it was Pakistan that strived hard to convince the Taliban first for talks with the United States and then with the Afghan government.

The prime minister said any other country of the region can claim equivalence with Pakistan’s efforts, also endorsed by US Special Representative Zalmay Khalilzad.

To a question about the promotion of sports in Afghanistan, especially cricket, the premier said that no country in the history of cricket except Afghanistan had achieved so much progress in a short period of time.

The position at which Afghanistan stood at the moment in cricket had been realized by other countries in 70 years, he remarked, adding that the main reason behind this success was Afghan refugees in Pakistan learning the game, which was appreciable.

To another question, the Prime Minister said unfortunately there was a misconception in Afghanistan, which was based on Indian propaganda, that Pakistan was controlled by military institutions.

Imran Khan said that his foreign policy was based on his party’s 25-year-old manifesto, adding that he had a consistent view that there was no military solution to the Afghan conflict, which could only be resolved through political means.

The prime minister said that being the party head for the last 15 years as well as being the head of government for the last three years, he had the same stance on Afghanistan and military institutions were fully supportive of the government’s view.

He said that Pakistan has always desired peace with India, but it was India that did not want peace because it is under the influence of the RSS ideology.

He said that not only are the Kashmiris being mistreated, but Muslims and people of other faiths and minorities, too, are mistreated. Such actions were the main hurdles in the way of peace with India, he added. APP

England to allow unquarantined travel from US and EU if...