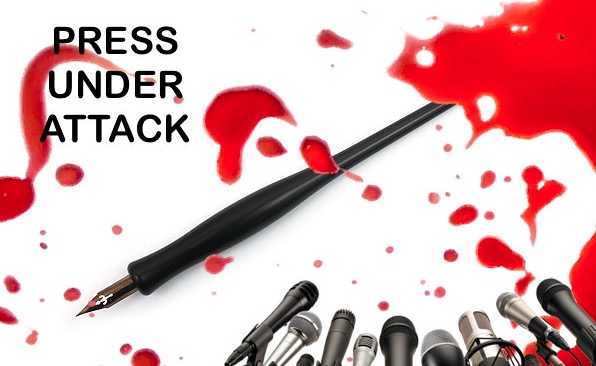 New Delhi: The Indian Journalists Union (IJU) has condemned the police in Indian Occupied Jammu and Kashmir for searching the residences of four journalists in Srinagar and questioning them at the police station.

Earlier, Indian police raided the residences of journalists, Hilal Mir, Shah Abbas, Azhar Qadri and Showkat Motta, and later summoned them to police station questioning them in connection with the ‘Kashmirfight Blog’, which, incidentally, has been blocked by an order of the Indian ministry of Electronics and IT.

“Such intimidation of media in the valley, as well as blocking of sites, must be halted, so that journalists can do their work without fear of reprisal,” the IJU demanded.

As per a press note, the police said that TRT World journalist Hilal Mir, freelance journalist Shah Abbas, The Tribune journalist Azhar Qadri and former editor-in-chief of The Narrator Showkat Motta were called in for questioning on Wednesday and Thursday at Kothibagh, Srinagar. Their homes were searched and their cell phones, laptops and other electronic gadgets were seized.

“This after IGP Vijay Kumar is reported as having said that the police had been observing journalists for ‘spreading fake news’. He is quoted as denying that it was an issue of harassing journalists and warning that those involved would be arrested in this case as and when the evidences are collected,” the IJU said.

It said reports suggest that the police in July had “searched several locations in Poonch, Srinagar and Pulwama and arrested individuals who they claimed were working for the blog.

In a statement, IJU president Geetartha Pathak and secretary-general Sabina Inderjit said that, “while the IGP claims due process of law is being followed while investigating a sensitive case, questioning journalists in police station seems to have become the rule rather than an exception.”

The IJU leadership said that “the intimidation through a claim that they were ‘spreading fake news’ is being misused.” The union urged the journalists’ organizations in the Kashmir Valley to take up press freedom issues vociferously with the Press Council of India, as soon as it is reconstituted. Web Desk