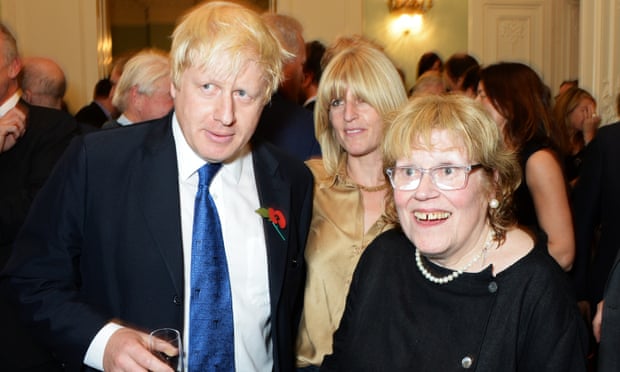 London: Charlotte Johnson Wahl, the mother of the prime minister, has died at the age of 79.

The portrait painter passed away “suddenly and peacefully” at a London hospital, the family said in a statement shared with the Daily Telegraph.

The prime minister has previously described his mother as the “supreme authority” in the family. At his first Conservative party conference in 2019, Johnson said his mother had taught him “the equal importance, the equal dignity, the equal worth of every human being on the planet”.

Born in 1942, she was the daughter of the barrister Sir James Fawcett, who was the president of the European Commission for Human Rights in the 1970s.

She read English at Oxford but interrupted her studies to travel to the US with Stanley Johnson, whom she married in 1963. She later returned to complete her degree, becoming the first married female undergraduate at her college, Lady Margaret Hall, and achieving second-class honours.

She made her name as a professional portrait painter. In 2015, she told the Telegraph: “My older sister was terribly clever, as was my younger brother. My parents didn’t know what to do with me so they gave me some paints and I turned out to be good at it. Once I started I couldn’t stop.”

Joanna Lumley and Simon Jenkins are among those to have sat for her portraits, but she also painted other subjects including landscapes. The Mall Galleries in London held a retrospective of her work in 2015.

She and Stanley had four children: Boris, Rachel, Jo and Leo, before they divorced in 1979. The prime minister’s son Wilfred, who was born in April 2020, was her 13th grandchild.

She once recalled how the prime minister got his name – when, after an uncomfortable Greyhound bus journey to Mexico City while three months pregnant, a man named Boris Litwin, whom they were staying with, gave them two first-class plane tickets for the journey back. “I was so grateful, I said: ‘Whatever the baby is, I shall call it Boris.’”

She later changed her mind and called him Alexander Boris de Pfeffel: “At Eton, his friends discovered his foreign name and everyone started calling him Boris – even the [teachers]. But everyone who’s known him since childhood calls him Alexander. If I were to call him Boris it would mean something was really serious.”

During the marriage Johnson Wahl suffered a mental breakdown and was admitted to the Maudsley psychiatric hospital where she stayed for nine months. She later described how she “lost it completely”, but used her time there to paint.

After moving out following her divorce, she earned a living selling her paintings and later recalled that she had been “very hard up”. She talked of one Dickensian Christmas where all the family could afford was “a capon because turkey was too expensive”.

In 1988 she married Nicholas Wahl, an American professor, and moved to New York, where she painted cityscapes, which were the subject of a sell-out exhibition in 2004. She was widowed in 1996 and moved back to London.

She was diagnosed with Parkinson’s disease aged 40 but carried on painting, using a walking frame to steady herself if she needed to. The only time she is known to have asked her son Boris, whom she described as “soft-hearted”, to use his influence was when he was mayor of London – she asked him to ensure buses didn’t move until everyone was sitting down, because “if you’re disabled, often you fall”.

Condolences from parliamentary colleagues began to pour in on social media on Monday night. The Labour leader, Keir Starmer, tweeted: “I’m very sorry to learn of the prime minister’s loss. My condolences to him and his family.” The Guardian

Promise of swift justice after yet another brutal rape-murder in...