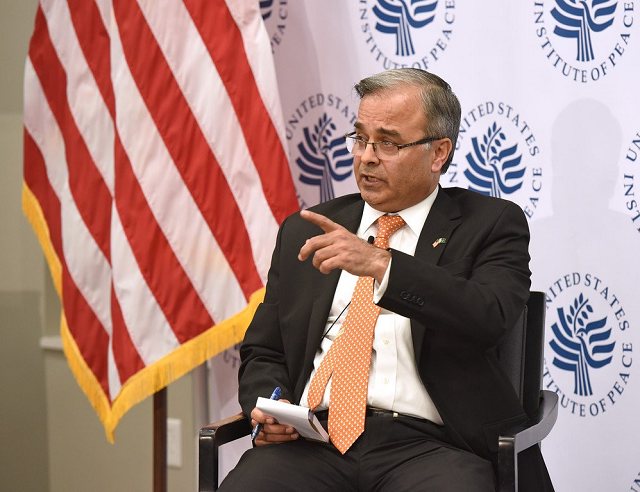 Washington: Pakistan’s Ambassador to the United States Asad Majeed Khan on Tuesday said Pakistan does not want Afghan territory to be used against any country including Pakistan.

“We want human and women’s rights to be preserved in Afghanistan”, the ambassador said in an interview with the Washington Diplomat, emphasising that averting a humanitarian crisis was of the utmost importance.

“We have basically laid out our expectations, which is that we want the rights of everyone to be respected,” he stated.

The envoy said both Pakistan and the US want to see the end of the conflict in Afghanistan, adding that the two countries would also like to see that the gains made over the last few decades in Afghanistan are preserved.

“I can tell you that today, we are together on the same side in terms of our interests and expectations in Afghanistan,” he said.

Commenting on the US withdrawal from Afghanistan and its impact on regional stability, the ambassador maintained that Pakistan’s consistent position throughout was that there was no military solution to the conflict and that a political dialogue was required.

“Pakistan went out of its way to support the intra-Afghan dialogue. We feel that important progress was made,” he stated, adding that the developments of the past few weeks took everyone by surprise and created confusion.

However, “at least on our side of the border, we have not seen the kind of refugee influx that everyone feared”.

The ambassador reiterated that it was important “to basically not let things fall apart”, keeping in view the new reality of a government under the Taliban.

“The international community has to make a choice: between engaging—and that doesn’t necessarily mean recognition—and abandonment,” he further said.

According to the ambassador, Pakistan, like other countries has not recognised the Taliban government but is monitoring the ability of the new government to respond to the concerns of the international community and to deliver on their promises.

He encouraged critics of Pakistan, who viewed the country as a supporter of “extremist groups”, to look “more deeply at the facts”.

“Pakistan has been a close partner and ally in decimating al-Qaeda, and in bringing about these peace negotiations,” he said.

When asked how Pakistan’s close friendship with China affecting its ties with the United States in the future, Ambassador Khan said the country did not want its relationship to be seen through any prism, be it Afghanistan, India, or China.

He maintained that Pakistan may have close relations with China, but its ties with the US are also close.

“As we speak, the US is the largest export destination for Pakistan, and our third-largest source of remittances, around $3 billion a year”, he stated. AFP

US spent $290m every day in Afghanistan for 20 years