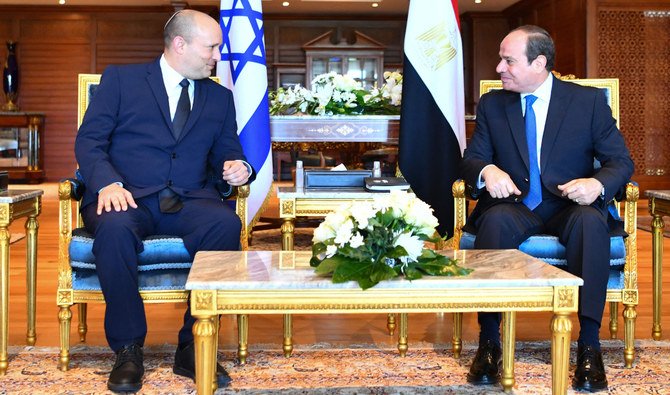 Cairo: Hopes rose of progress in the Palestinian peace process after landmark new talks between the leaders of Egypt and Israel.

Egyptian President Abdel Fattah El-Sisi and Israeli Prime Minister Naftali Bennett met in the Red Sea resort of Sharm El-Sheikh for discussions that focused on Palestinian-Israeli relations. It was the first official visit to Egypt by an Israeli head of government for a decade.

The two leaders discussed “efforts to revive the peace process” between the Palestinians and Israelis, presidential spokesman Bassam Radi said. El-Sisi “affirmed Egypt’s support for all efforts to achieve comprehensive peace in the Middle East, according to the two-state solution,” he said.

Bennett said the talks also covered diplomacy, security and the economy. “We created a foundation for a deep connection going forward,” he said.

Bennett and El-Sisi also discussed regional issues, including Iran’s influence in the Middle East and the crisis in Lebanon, diplomats and security sources said.

The meeting followed a proposal by Israel’s Foreign Minister Yair Lapid to improve living conditions in Gaza and build new infrastructure in exchange for a period of calm from Hamas, aiming to solve the “never-ending rounds of violence.”

But “it won’t happen without the support and involvement of our Egyptian partners and without their ability to talk to everyone involved,” Lapid said.

Monday’s talks were “an important step in light of the growing security and economic relations between the two countries, and their mutual concern over the situation in Gaza,” said Nael Shama, an analyst in Cairo. It also fitted with “Egypt’s plans to revive the political talks between Israel and the Palestinian Authority,” he said.

Bennett’s visit coincided with a boost to transport links between Egypt and Israel. The Taba crossing between Israel and Sinai, an entry point for Israeli tourists, became fully operational from Monday as restrictions put in place during the coronavirus pandemic were lifted, Israel’s Transport Ministry said.

And from October, Egyptair will begin operating several flights a week between Cairo and Tel Aviv.

The last official visit by an Israeli prime minister to Egypt was when Benjamin Netanyahu met former Egyptian President Hosni Mubarak in Sharm El-Sheikh in January 2011, just before the uprising that toppled Mubarak. Arab News