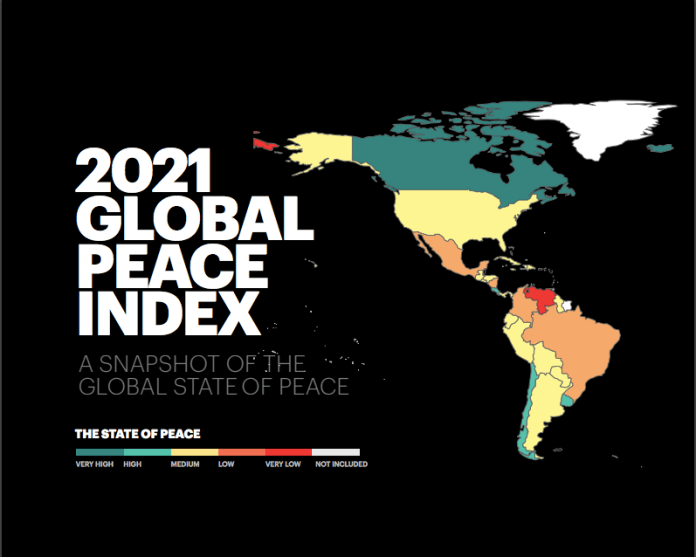 Christchurch: North America recorded the most drastic deterioration in peace in the last year compared to other regions around the globe, a report on global peacefulness revealed.

The Global Peace Index, which is released annually by the Institute for Economics and Peace, revealed that global peacefulness has fallen each year nine out of the past 13 years, with each country falling by about 2 percent annually. Experts in peace studies said this year’s deterioration in peace is consistent with a long-term downturn in peacefulness globally and that some of the decreases could be attributed to the prevalence of the COVID-19 pandemic.

Ongoing conflict and safety and security – two of the three domains the GPI uses to measure peacefulness – deteriorated by 6.2 percent and 2.5 percent respectively, according to the report.

“Militarisation was the only domain to improve,” the report states. “Terrorism and civil unrest have been the biggest contributors to the global deterioration in peacefulness.”

The report states that it’s still too early to determine the full extent of the pandemic’s impact on peacefulness but states that the changing economic situation in many parts of the world have led to an increase in the likelihood of political instability and violent demonstration.

Reuters reported that causes for economic deterioration are specific to each country, but that the impact is generally worse when a country is experiencing social unrest.

“If we don’t have social cohesion in a country, we have to try and understand how the government plans to react to that … or whether there is a political force that comes in and implements change,” Yerlan Syzdykov, Amundi’s global head of emerging markets, told Reuters.

North America experienced the greatest regional drop in peacefulness, with safety and security accounting for the majority of the deterioration.

“The primary driver of this fall in peacefulness was a deterioration on the Safety and Security domain, especially in the United States, where growing civil unrest led to increasing perceptions of criminality and political instability, and more violent demonstrations,” the report states.

Liz Hume, the CEO of the Alliance for Peacebuilding, said the pandemic has contributed to a decline in government stability worldwide. She said countries have seen an increase in violent extremism as governments’ stability has become challenged in the face of the pandemic.

She said the international community should understand that high levels of instability have become the “baseline” for countries around the globe and should focus on vaccine distribution to mitigate the effects of widespread political instability.

“It is incredibly destabilizing, because most people will look to their government to provide services, provide health care, provide vaccines, and when governments can’t do that, their legitimacy and effectiveness is challenged,” she said.

“Instead of COVID bringing the United States together with a common challenge and a common enemy like it has done in the past with let’s say World War II, when you look at something that can be a unifier, it was a divider,” Hume said.

The Fragile States Index, which is released each year by the Fund for Peace, revealed that the pandemic contributed to high levels of insecurity even in nations that had strong health infrastructure and stable economies. Across the board, the pandemic exacerbated divisions within countries that were already starting to divide.

Hume said the Alliance for Peacebuilding has worked with U.S. policymakers to push for anti-extremism policies to be implemented in the United States.

The Alliance for Peacebuilding penned a letter to U.S. President Joe Biden late last month calling on his administration to implement seven recommendations, including investing in rural infrastructure and investing in programs that build social cohesion, to curb the effects of the United States’ decline in social cohesion.

Tim Donais, a professor of political science at Wilfrid Laurier University, said the decline in peacefulness in North America could serve as a wake-up call for North Americans who don’t typically think about developed countries as needing peacebuilding.

“In the context of the developed world, we’re used to looking outwards at conflict-affected countries in Africa or the Middle East and thinking about these concepts in that kind of context,” he said. “We’re much less familiar and much less comfortable thinking about questions of peacefulness and the need for peacebuilding in our own national contexts.”

Donais said the bleak outlook on race relations in the United States and the Jan. 6 attack on the U.S. Capitol has contributed to the drop in peacefulness in the country. He added that people’s perceptions of stability go hand in hand with the actual levels of instability

“A lot of safety and security issues in particular, come down to people’s perceptions as well, in the sense of growing unrest,” he said. “The country’s being deeply divided, potentially on the verge of conflict between the great demonstrations around Black Lives Matter, probably, among a lot of Americans.” Peace News