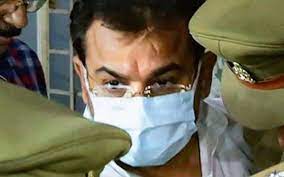 Eight people, including four farmers, were killed in the violence last week during a protest against the Centre’s new agriculture laws. Farmer bodies have alleged that a vehicle which was part of Ajay Mishra’s convoy ran over the protestors. They have claimed that the car belonged to Ashish Mishra.

Mishra has been charged with multiple offences, including murder and criminal conspiracy, in the case.

On October 9, Ashish Mishra was arrested by a Special Investigation Team after over 11 hours of questioning. He was sent to three days in police custody on Monday after the police said that they want to interrogate him about a possible “conspiracy” in the violence case.

Apart from Mishra and Pandey, the police have arrested four people identified as Luvkush, Shekhar Bharti, Ankit Das and Lateef.

Das is an aide of Ashish Mishra, according to The Indian Express. Lateef is Das’ accountant. The two men were inside one of the vehicles that allegedly ran over protestors in Lakhimpur Kheri, The Indian Express reported.

The Opposition has sought the dismissal of Ashish Mishra’s father Ajay Mishra so that a fair investigation can be conducted.

A Congress delegation led by party leader Rahul Gandhi met President Ram Nath Kovind on Wednesday to demand justice for the families of the farmers killed in the violence. Scroll. In

Border dispute: India, China issue accusatory statements against each other...