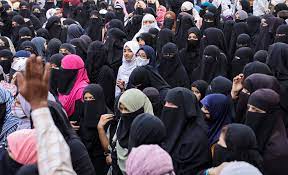 Bangaluru: Twenty-four students studying in a college in Dakshina Kannada district in the Indian state of Karnataka have been banned for a period of seven days from attending classes for wearing hijab.

The decision was taken by authorities of the Uppinangadi Degree College in Puttur Taluk after the students refused to attend classes without taking off their hijab.

The latest incident comes as the government of Karnataka has issued guidelines for schools and colleges making uniform compulsory for students without giving any room for wearing hijab in classrooms.

Many of the students belonging to the Muslim community have applied for transfer certificates from education institutions to join other colleges where hijab is allowed.

College managements have also communicated to students that those who wish to attend classes wearing hijab could take transfer certificates.

The hijab crisis, which started as a protest by six students of Udupi Pre-University Girl’s College, has turned out to be a major situation in Karnataka over the past year. Web Desk