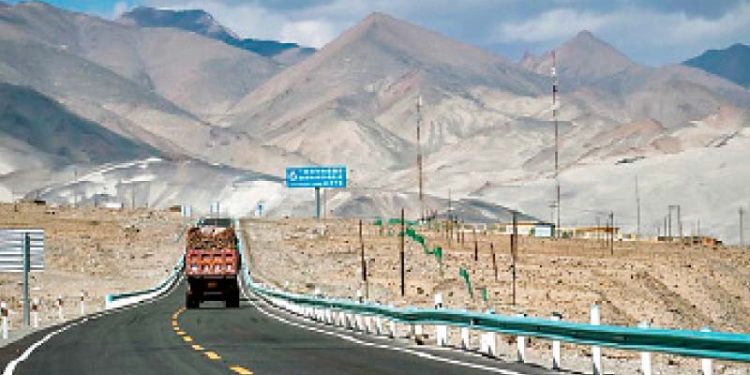 The New Gwadar International Airport, the flagship project of China-Pakistan Economic Corridor (CPEC) is scheduled for completion by September 2023. According to Chinese State Television CGTN, the second largest airport of Pakistan, launched in 2019, is a $230 million project funded by China and managed by China Airport Construction Group.

The Gwadar Airport is included in the number of projects being carried out in Balochistan province, which will give access to China to reach warm waters and deep sea port in Arabian Sea. Recently Prime Minister Shehbaz Sharif inaugurated the Gwadar Eastbay Expressway, which connects the port city to Karachi through Makran Coastal Highway.

When the expressway was planned, the fishing communities fear losing their livelihood and the possibility of being relocated out of Gwadar city. Locals were of the view that it will limit access to the sea for fishing boats, and threaten their centuries-old livelihood without any alternate plan. Later in 2019, the then Prime Minister Imran Khan in his visit to the port city assured that their concerns will be addressed.

Since the launch of CPEC, the flagship project of Belt and Road initiative (BRI), Pakistan and China has reached a new mile stone. After the completion of first phase, based on infrastructure, the second phase has been started which will include the establishment of industries and economic zones. The economy of Pakistan is seeing a major shift as the CPEC is taking shape in the country.

In the age of economic integrity and changing political environment, Pakistan is keen to strengthen itself domestically and bring much needed change in Balochistan. After the launch of CPEC, the socio-political stability of the province has become crucial for political leadership and policy makers. By the development of Gwadar port and other projects under CPEC, it is expected that necessary avenues for further economic benefits and connections with other provinces and regions will help support the economic development of Balochistan.

The restive province of Pakistan was neglected due to many problems, including security, political will and lack of funds. It has remained a far flung area due to its vast terrain. According to CPEC plan, the projects for the people of Gwadar were road infrastructure, energy, port, airport and health and basic facilities including water.

CPEC projects have the potential to revive and give new life to economic activities in the province of Balochistan but at the same time there are numerous concerns of the locals. People are of the view that province’ share in the project is only 4.5 percent and they fear that the benefits may not flow down to the locals.

Gwadar is yet to see the fruits of the promised “economic development” and “long-term prosperity.” As the local people say, “We are not against development that includes economic and social growth for us and does not destroy our homes and livelihood, but we are against the development that excludes us and leaves us empty handed.”

As the Chinese projects and people have faced multiple attacks, including suicide bombings, and to safeguard them from such scenarios, the additional cost of security will make the projects more expensive. Conventional security for CPEC projects is essential, but state institutions cannot ignore the strategic and political context.

The state institutions are engaged in a broader dialogue with Baloch people, especially the youth. It is important to understand the perspectives on the ground and there is a change needed in approach and political actors should also initiate such processes.

The local people of Balochistan want development. After all, the majority of the population lives in rural areas. They also want to be part of that development and expect the center to resolve their concerns.

If the plan and projects are carried out in true letter and spirit, the CPEC is going to provide roads, hospitals, schools, and economic opportunities to locals, particularly Baloch, eventually giving them independence to decide their own fate and not to be dictated by the anarchist elements.

Conflict-related sexual violence against men, boys and people with diverse...