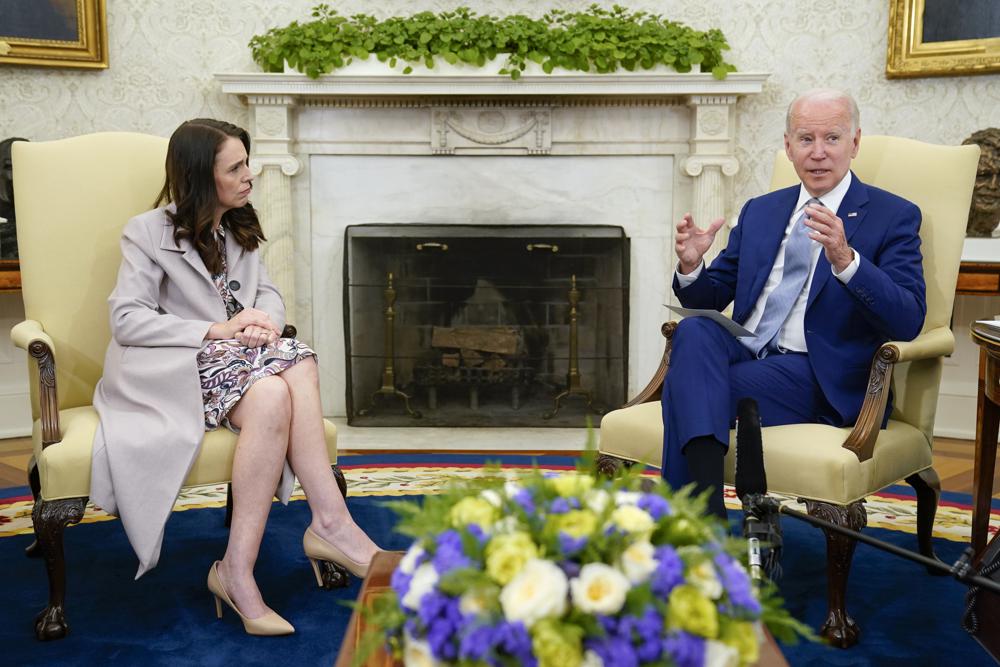 Washington: President Joe Biden praised New Zealand Prime Minister Jacinda Ardern for her success in curbing domestic extremism and guns as he tries to persuade a reluctant Congress to tighten gun laws in the aftermath of horrific mass shootings in Uvalde, Texas and Buffalo, New York.

The long-planned talks between Biden and Ardern centered on trade, climate and security in the Indo-Pacific, but the two leaders’ starkly different experiences in pushing for gun control loomed large in the conversation.

Ardern successfully won passage of gun control measures in her country after a white supremacist gunman killed 51 Muslim worshippers at two Christchurch mosques in 2019. Less than a month later, all but one of the country’s 120 lawmakers voted in favor of banning military-style semiautomatic weapons.

Biden told reporters at the start of his meeting with Ardern that he “will meet with the Congress on guns, I promise you,” but the White House has acknowledged that winning new gun legislation will be an uphill climb in an evenly divided Congress.

The U.S. president praised Ardern for her “galvanizing leadership” on New Zealand’s efforts to curb the spread of extremism online, and said he wanted to hear more about the conversations in her country about the issue. White House press secretary Karine Jean-Pierre said the two leaders spent part of the meeting discussing “what has been done on gun reform” under Ardern’s watch.

Ardern and French President Emmanuel Macron in 2019 launched an effort to work with tech companies on eliminating terrorist and violent extremist content online. Then-President Donald Trump declined to join the effort, but the Biden administration has since joined the Christchurch Call to Action.

Biden over the weekend traveled to Uvalde, Texas, to grieve with a community that he said made clear to him they want to see Washington tighten gun laws in the aftermath of the shooting rampage that killed 19 children and two teachers. Biden heard similar calls for an overhaul of the nation’s gun laws earlier this month when he met with families of 10 Black people who were killed in a racist attack at a Buffalo supermarket.

Biden and Ardern also discussed a May 15 shooting at a lunch banquet at a Taiwanese church in Laguna Woods, California that killed one person and wounded five others.

“The pain is palpable,” said Biden, recalling his anguished conversations Sunday with families of victims of the Texas elementary school shooting.

Ardern offered condolences and said she stood ready to share “anything that we can share that would be of any value” from New Zealand’s experience.

“Our experience demonstrated our need for gun reform, but it also demonstrated what I think is an international issue around violent extremism and terrorism online,” Ardern told reporters following her more than hour-long meeting with Biden. “That is an area where we see absolutely partnership that we can continue to work on those issues.”

It’s unclear what, if anything, from New Zealand could be applicable to the United States, which hasn’t passed a major federal gun control measure since soon after the 2012 Sandy Hook Elementary School shooting in Connecticut that left 26 dead.

A bipartisan group of senators held a private virtual meeting Tuesday to try to strike a compromise over gun safety legislation, but expectations remain low. Senators aren’t expected to even broach ideas for an assault weapon ban or other restrictions that could be popular with the public as ways to curb the most lethal mass shootings. Republican Sen. John Cornyn of Texas, who led the session alongside Sens. Chris Murphy, D-Conn., Kyrsten Sinema, D-Ariz., and Thom Tillis, R-N.C., called Tuesday’s talks a “very constructive conversation.”

Meanwhile, House Judiciary Committee Jerrold Nadler plans to hold a hearing Thursday on the “Protecting our Kids Act” — a package of eight bills that has almost no hopes of passing the Senate but would serve as a marker in the debate. It includes calls to raise the age limits on semi-automatic rifle purchases from 18 to 21 years old; create a grant program to buy back large-capacity magazines; establish voluntary safe practices for firearms storage and build on executive measures to ban bump stock devices and so-called ghost guns made from 3-D printing.

Speaking of the Christchurch shooting, she said that “in the aftermath of that, the New Zealand public had an expectation that if we knew what the problem was, that we do something about it. We had the ability with actually the near-unanimous support of parliamentarians to place a ban on semiautomatic military-style weapons and assault rifles and so we did that. But the New Zealand public set the expectations first and foremost.”

The New Zealand prime minister did not urge any particular course of action to Biden during their talks, but expressed a broad understanding of what the United States is going through, according to a senior Biden administration official who spoke on the condition of anonymity to discuss the private conversation.

Ardern last week, during a speech at Harvard University’s commencement, spoke to the scourge of disinformation that is spread and amplified on social media. She said it represents a threat to fragile democracies.

The Christchurch gunman was radicalized online. The attack, like the Buffalo supermarket rampage, was livestreamed on social media, she noted. AFP

WHO plans to curb monkeypox outbreak by human transmission