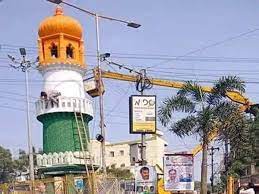 New Delhi: Several BJP leaders and workers, including the national secretary of the party, Sunil Deodhar, demanded to change the name of Jinnah Tower Centre in Guntur, a city in India, after which they were taken into police custody, NDTV reported.

The party workers decided to protest and march to Jinnah Tower but the police intervened and many were detained.

Some Hindu organisations have been asking for the change of the tower’s name for the past few months but they were not given any attention. They think that the building should be named A P J Abdul Kalam Tower. BJP Rajya Sabha member GVL Narasimha Rao condemned the police’s action towards the party leaders.

He said in a tweet: “I wonder if we are in Andhra Pradesh or Pakistan.” NDTV

Image of Sheikh Abdullah replaced with national emblem in IIOJK...

Texas school massacre: Onlookers say more lives could have been...