Many farmers in India turn to suicide due to debt burden 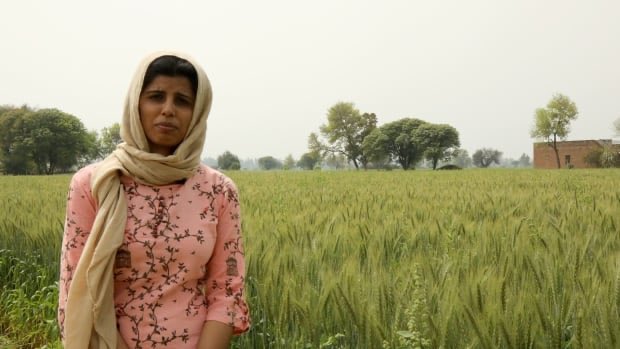 Kiran Kaur surveys her family’s paltry plot of land in Mansa, in the northern Indian state of Punjab, and gestures dismissively at the three acres of wheat that will soon yield to cotton plants, which bring in little profit.

“Cotton is a complete failure for us,” she said. Prices are low, and the cost of producing the fibre is far too high.

It’s what drove her father, Gurnam Singh, to take his own life nearly five years ago on the same plot of land that defeated him, driving the family to the edge of economic ruin, she says.

“Life is still very tough without him here,” Kaur, 25, told CBC News. “But that first year after his death almost destroyed me and my family.

“I dropped my studies and sat at home. The world blacked out for me. I have no recollection of the 10 days that followed his death.”

What fills Kaur with guilt is that she didn’t see it coming. Her father was one of her best friends, and yet, he kept the crippling debt he was struggling to manage hidden from her and the family.

She knew about the massive loans her husband had taken out to pay for their eldest daughter’s wedding and to cover medical treatment for Kiran. Even so, the notion that her husband would kill himself never entered her mind.

“I never thought [the suicide crisis] would hit me,” Shinderpal said. “Not in my wildest dreams.”

The crisis is deeply felt in Mansa, one of the poorest districts in Punjab, which is often referred to as the country’s breadbasket, because of its rich soil and rice fields.

Nearly every village here has had a string of suicides over the past few decades, but the problem goes beyond the district and even the state.

As in the rest of the world, the agriculture sector in India is hit disproportionately hard by suicide. Sixty per cent of the country’s population works in agriculture.

The latest data from the National Crime Records Bureau shows more than 10,000 farmers and agricultural labourers killed themselves in 2019 — that’s 7.4 per cent of India’s total suicide victims. (As a comparison, students also made up 7.4 per cent while civil servants accounted for 1.2 per cent.)

That means an average of 28 suicides in India’s farming community every day.

Hidden behind the headlines of the massive farmer protests in India is a suicide crisis that’s devastating families. The latest numbers show 30 farmers die by suicide every day in the country.

While there’s rarely just one factor that leads to suicide, the root causes for the suicides among India’s farmers highlighted in the government’s data are mainly linked to despair over their livelihoods. That ranges from bankruptcy and debt to farming-related issues and crop failure.

The crisis is spread across two dozen of India’s states, with the highest number of agricultural suicides in the densely populated Maharashtra state. But it is particularly acute in Punjab, where farmer suicides have increased more than tenfold in the past five years.

The state was transformed in the mid-1960s by the Green Revolution, when the government introduced subsidies to encourage farmers to grow high-yielding rice and wheat varieties that eventually led to the country becoming self-sufficient in those grains.

But over the years, problems started to accumulate. All those water-intensive paddy fields led to the depletion of the area’s groundwater. Many farmers poured money into digging deeper wells and into pesticides to protect their crops, but their costs spiralled, leading to crushing debt for many.

Decades in the making, it’s such a deep-rooted crisis that many farmers take their own lives by consuming a pesticide called Sulfas. In Haryana state, the phrase “consuming Sulfas” has become shorthand for suicide.

“It’s become a social phenomenon,” said Vikas Rawal, an economics professor specializing in agrarian distress at New Delhi’s Jawaharlal Nehru University. He noted that references to Sulfas have also turned up in songs dealing with the plight of India’s farmers.

“It’s a loss-making enterprise, but these farmers don’t have anything else to do, so they just keep doing it,” Rawal said. Jobs are scarce, and many people are also reluctant to give up even the smallest plot of land their families own to work for someone else. Rawal said they end up having few options but to descend further into debt.

He said up to 90 per cent of India’s farmers can’t cover the basic costs of fertilizer, seeds, pesticide and other equipment.

“Your cost of production has gone up and then you’ve been made to compete with the world,” Rawal said, especially with the majority of India’s farmers tilling tiny plots of land.  “That has squeezed incomes of farmers so much that basically they’re being forced to commit suicide.”

Kiran Kaur’s family in Mansa has been especially hard hit. Her father was one of three brothers out of four who took their own lives, leaving behind three widows and their young children.

Kiran’s aunt Malkeet lost her husband to suicide 17 years ago, when their two sons were eight and 10 years old. The years since have been difficult, she said, wiping away tears, with a nephew taking care of the fields because her children were too young.

It took five years before anyone explained to Malkeet how to apply for her government-issued widow’s pension. Once she got it, it only came intermittently, disappearing inexplicably for years at a time before being re-introduced. The pension is the equivalent of $12 Cdn a month.

Another of Kiran’s aunts, Gurmeet Kaur, sat staring into the distance during our interview, clearly still mourning her husband, Gumdoor. He took his life two years ago, on New Year’s Day.

“We never had a happy day,” Gurmeet told CBC. “The daily struggle basically destroys you.

“We used to think we were doing all this work for our children. But once the father dies, the children are burdened.” She also said she felt betrayed by nature when bad weather led to crop failure.

India’s suicide rate was 12.7 per 100,000 as of 2019, according to the WHO, but experts have said the actual numbers are likely far higher than the official figures because of the stigma in a country where trying to take your own life is still listed as a crime in the penal code.

The country also lacks a national suicide prevention strategy, although some initiatives are folded into India’s mental health plan. In 2016, the Modi government introduced a crop failure insurance program in an attempt to address a spate of farmer suicides following a lengthy drought.

For nearly four months, farmers in India have held protests to oppose new agricultural laws they say will strip them of their livelihoods. But the government has only offered them only a few concessions, and the protesters say they won’t back down until there are more changes. 2:32

The fact that India, like nearly every other economy, has been hobbled by the coronavirus pandemic and strict lockdowns has drastically compounded the suicide problem, according to Rawal.

He also fears the potential impact of Prime Minister Narendra Modi’s new farm laws, which have prompted months of protests, has also driven up suicide rates.

In September, India abruptly transformed the way the country’s massive agricultural sector works, passing new laws that reduce the role of the government in grain markets in an attempt to modernize the industry. It’s a move the farmers fear will push prices down and further ruin livelihoods.

“Having fought for so long to survive … [they] just don’t see this government giving a damn about it,” Rawal said. “That’s forced some people to actually take their lives there in the protest sites or when they went back home.”

It’s estimated several hundred farmers have died at the three large protest camps currently surrounding India’s capital, New Delhi, but it’s unclear how many of those killed themselves.

Tens of thousands of India’s farmers have been camped out for months at several sites bordering India’s capital, New Delhi, in protest of the government’s new laws, which farmers fear will crush livelihoods. (Salimah Shivji/CBC)

As a result of the severe backlash, the proposed laws are now on hold, but tens of thousands of farmers are still camped out in protest, pushing for a complete repeal of the legislation.

‘There needs to be reform’

The standoff is in its fourth month even though both sides know the system as it stands is unsustainable, said Harish Damodaran, agriculture editor at the daily newspaper The Indian Express.

“Everyone agrees that there needs to be reform … that this cannot be sustained forever,” Damodaran said. “Even the farmers themselves.”

But he said the Modi government’s error was not moving slowly and prioritizing financial incentives for India’s farmers to diversify the crops they grow.

“It has to be done very sensibly, very carefully, very sensitively. No reform is possible without consulting the stakeholders,” Damodaran said.

Many farmers across India are struggling with high debt to keep their farms going. More than 10,000 farmers or agricultural labourers took their own lives in 2019. (Salimah Shivji/CBC)

The protesting farmers see the so-called black laws as a path to allowing large corporations in and a means to decimate the traditional “mandi” system, which guarantees a minimum price for their produce.

“We’re not going to leave until we get what we came here for,” said Surinder Singh, who has a small farm in Punjab, while sitting near his chai stand at Singhu, the largest protest site surrounding Delhi.

“We know we’ll be here for the long haul, years if needed,” Singh said. He said the harvest will continue to be done by others at home, allowing the protesters to stay put.

Even with the regulated minimum price for rice and wheat in some areas, many farmers are barely making ends meet. The fact it could disappear is a devastating thought for many at the protests.

Many don’t trust the Indian government, which has promised it will not get rid of the floor price. Kiran feels that fear whenever she walks around the protest camp.

She often visits a community kitchen set up by a rotating group of widows at the Singhu camp. On one recent visit, the women were making rotis for other protesters, loudly joking that India’s prime minister should come visit and speak to them directly to truly understand the life of an Indian farmer.

Kiran Kaur joins a group of widows making roti at the Singhu protest site, set up by farmers bordering the Indian capital. It’s part of the work Kaur does to support families left behind by suicide. (Salimah Shivji/CBC)

After the loss of her father, Kiran started an organization to help widows in her home state. She now buses around Punjab, meeting widows and their families to explain the services available to them, and to emotionally support those “teetering on the brink” and contemplating suicide.

She sees it as another way to honour what her father would have wanted for her.

“The government does not care,” Kiran said. “Nobody wants to talk to or listen to the widows or the families of suicide victims.”

Hearing the stories, day after day, of widows struggling is not easy, but it gives Kiran strength. “It furthers my resolve to fight for them, to help them be heard.”