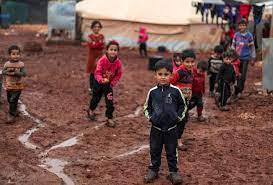 Irbil, Iraq: Women and children held in Al-Hol, a sprawling camp of some 57,000 people in northeast Syria, endure squalid conditions and almost daily violence, meted out by its many hard-line inmates who still cling to the extremist ideology of Daesh.

Violence is endemic inside the camp, where there have been at least 130 murders since March 2019, according to Save the Children. In 2021 alone, an average of two people per week were killed, often with impunity and in plain sight of children.

Owing to the often extreme climate and the lack of facilities, respiratory tract infections and malnutrition are rife in camps for IDPs in Syria. (AFP)

The overwhelming majority of these attacks took place in Al-Hol’s main camp, which is home to Syrian and Iraqi nationals. Al-Hol annex, which has also seen its share of insecurity, houses women and children from at least 60 other countries.

“We provide services, but, at the end of the day, it is still a camp and is, therefore, inadequate as a housing project,” Dr. Alan Dahir, an official from the Kurdish Red Crescent, which manages the site, told Arab News.

“Most children are orphans. While I don’t think they have been forgotten, including the foreign women, their respective countries are yet to come forward and claim them.” Arab News