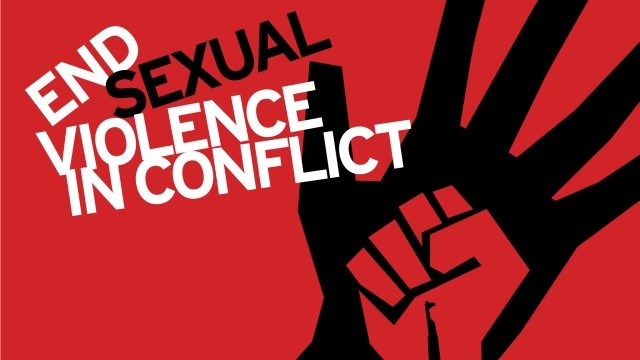 In March 2022 a UN Human Right’s report describes continued violence against civilians in Tambura, South Sudan, between June and September 2021, with at least 64 cases of sexual violence including 7 men[2].

Conflict related sexual violence (CRSV), as defined by the United Nations[3] refers to incidents or patterns of sexual violence such as rape, sexual slavery, forced prostitution, forced pregnancy, forced abortion, enforced sterilisation against women, men, girls, or boys. They may occur in conflict or in post-conflict settings and are direct or indirect connection with the conflict. SOGIESC stands for Sexual orientation, gender identity, gender expression and/or sex characteristics.

CRSV has been documented in almost every conflict, efforts are mostly focused on women and girls, men, boys, and people with diverse SOGIESC are only recently subject of research or aid. To what extend are men, boys, and people with diverse SOGIESC affected by CRSV? To answer that it is important to understand the context and barriers associated with sexual violence when aggravated by conflict.

A vital lesson during this internship was the intersectional approach of ASP’s works. Crenshaw, who coined the term, defines it as conceptual framework that looks to uncover the dynamics of different interconnected dimensions [such as race and ethnicity, ability, sexual orientation, religion, age, and socioeconomic status] and determine how these factors interact to comprehend how people exert influence over others, or experience discrimination and oppression as a result of multiple intersecting vulnerabilities[4].

Gender and violence intersect, although women and girls are the most affected by CRSV, men and LGBT people are also affected differently by CRSV. Gender is not only about women and girls, it’s a concept that outlines how societies determine and regulate sex categories; the customs associated to men and women’s responsibilities. Furthermore, Connell argues that culture determines what is masculine and “unmasculine”[5].  The heteronormativity dimension of patriarchy connected with conflict aggressively communicates which sexualities, femininities and masculinities are acceptable within society envisioned by perpetrator’s group. Sivakumaran argues that CRSV is used to weaken the opposition in a conflict because once violated, men and boys fail to live up to the traditional masculine ideal since they are shown to be incapable of protecting themselves, and by extension, their women and communities[6].People with diverse SOGIESC challenges patriarchal systems, values, and practices. CRSV is about asserting dominance, violation, and subjugation.

Nevertheless, there are existing gaps in knowledge, preventing and responding to sexual violence. ASP conducted research in multiple conflict affected countries and discovered that the scale of CRSV against men, boys, and people with diverse SOGIESC remain severely under documented.

Barriers in reporting and addressing men, boys, and LGBT[7] survivors

During the internship it was evident that one factor that led to the gap in documentation is the lack of acknowledgment of forms of sexual violence, for instance castration or other genital mutilation are more likely to be considered as torture than sexual violence, which in turn deepens the gaps in reporting and addressing male and LGBTI survivors.

As mentioned above, patriarchy and heteronormativity punish which sexualities, femininities and masculinities are acceptable. In opposition to women whose bodies are seen as “naturally” sexually vulnerable, men and their bodies are viewed as “sexually invulnerable”. Therefore, men cannot be raped in the patriarchal societies, which refrains them from talking about these violations as they fear stigmatisation from their community who could rip them of their masculinity. Kiss et al identify common misconception and prejudices about sexual violence against men and boys, “real men” defend themselves, ‘sexual assault by someone of the same sex causes homosexuality’. These statements create barriers for survivors to speak up as they experience guilt, and self-blame around their sexuality[8].

These gaps have dire consequences on survivors on numerous levels, they suffer from the health consequences such as STI, trauma to the genitalia, severe and chronic pain while urinating or defecation, impotence/infertility, depression anxiety, PTSD, memory loss, self-harm, suicidal ideation. On a socio-economic level, they face stigma, blame, rejection by spouse and children, families, communities. Their livelihoods are likely to also be affected as they could face compromised physical health and mental health challenges.

The impacts of CRSV are extremely traumatic, resulting in severe physical, social, and financial problems for male and LGBT survivors. On the individual level, for survivors, the self-stigma can constitute an internalised barrier as they have internalised community stigma and harmful social norms, and masculinities. The lack of information on sexual violence constitutes a barrier, survivors and the community lack awareness on CRSV against male and LBTI people. On the society level, the lack of legislation and impunity usually due to a state-level instability and inaction reinforce barriers to prevent sexual violence.

– DOLAN C., 2014. Into the mainstream: Addressing sexual violence against men and boys in conflict. Briefing paper prepared for a workshop held at the Overseas Development Institute, London, 14: 1–12.