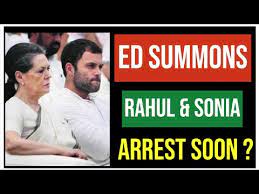 New Delhi: Indian Enforcement Directorate (ED) has summoned Congress leadership Sonia Gandhi and Rahul Gandhi in connection with the alleged National Herald money laundering case. While Sonia has been asked to join the investigation on 08 June, Rahul was called on 02 June.

In 2014, Rahul Gandhi, in one of his speeches blamed RSS for the death of Mahatma Gandhi, following which RSS leader Rajesh Kunte filed a defamation suit against him before a judicial magistrate in Bhiwandi, Maharashtra.

Last month, the court ruled in favour of the Wayanad MP and Kunte was asked to pay a fine of ₹1,000 to Gandhi. In March 2022, Gandhi received a notice from the Gujarat High Court in another defamation case filed by state BJP Minister Purnesh Modi in April 2019 over a generalized remarks the Congress leader made over the surname ‘Modi’. Speaking at a rally in Karnataka ahead of the 2019 general elections, Gandhi reportedly asked, “Nirav Modi, Lalit Modi, Narendra Modi… How come they all have ‘Modi’ as the common surname? How come all the thieves have ‘Modi’ as the common surname?” Last year, Gandhi appeared before the Surat court and pleaded not guilty. As per media reports, a public interest litigation (PIL) was also filed in the Jharkhand High Court for his “derogatory remarks”. However, the HC granted him relief in the case.

In 2018, referring to the Rafale fighter jet deal between India and France, former Congress President allegedly called PM Modi “the commander-in-thief”. The statement did not go down well with the ruling party at the Centre, and BJP worker Mahesh Shrishrimal filed a complaint against Gandhi at the magistrate court in Girgaum, Maharashtra. Hearings in the ongoing case have been deferred as per the Bombay high court’s instruction to the magistrate court. Web Desk