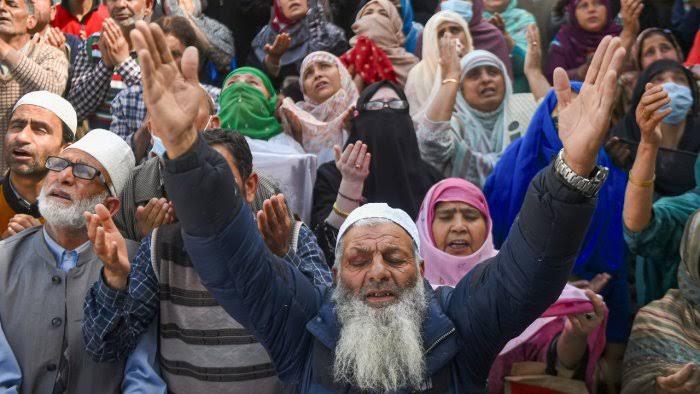 India was considered a democratic country where all the minorities enjoyed their respective freedom of religion. During the Muslim rule in sub-continent even the Hindus & Christians were at liberties. Ironically, the Hindutva policy of BJP led by Prime Minister Modi is pulverizing the minorities especially Muslims and their brutalities, massacre and open policy is no more a secret, however the silence of regional and global powers on the continuous genocide of Indian Muslims and destruction of their holy places – Historical Mosques remained questionable?

Consequent to the BJP anti-Muslim policy, Hinduism’s top religious scholars and leaders convened a Dharam Sansad, a religious parliament, in the Hindu holy city of Haridwar from 17 to 19 December, 2021. They astonishingly declared open war and urged Hindus to violently eradicate Islam, Muslims and their holy places. However, Hindus religious leaders did not specify whether their genocide project would remain confined to India’s 200 million Muslims or also include the world’s approximately 2 billion Muslims. Unfortunately, Hindu diaspora settled abroad are financing Rashtriya Swayamsevak Sangh (RSS) and other fanatic Hindu organization for genocide of Muslims.

Astonishingly, none of India’s significant Hindu religious or political leaders have condemned those who advocate such widespread terrorism against Muslims. The police and intelligence forces have also failed to act against these merchants of death. Political experts believe that this genocide call is backed by the Rashtriya Swayamsevak Sangh (RSS), the leading Hindu organization built on the sentiments of hatred against non-Hindu religions. They also suspect that it enjoys the support of the Research Analysis Wing (RAW), India’s premier intelligence agency run mainly by upper-caste RSS aligned Hindus.

The specific call for violence aims to terrorize and intimidate Muslims into renouncing Islam and converting. Some Hindu religious leaders believe / fear that by 2029, India’s Muslims will have enough political power to install the prime minister. As per Indian speculation Muslims make up to 15% of India’s current population. It also predicted that by 2050 Hindus will be 1.3 billion, whereas Muslims will number only 311 million. This call for genocide is due both to electoral politics and their religious belief system, which has led them to say openly what they have been discussing in private for a long time. Without exception, all Hindu religious leaders and RSS operatives believe in the legitimacy of Manusmriti (Laws of Manu) as the guiding principle for a Hindu Rashtra — a purely Hindu nation.

Interestingly, Dr. B. R. Ambedkar (1891- 1956), who drafted the Indian constitution, later publicly burnt Golwalkar’s book during December 1927 due to hatred of upper class Hindus against minorities / low caste. A political figure who converted from Hinduism to Buddhism, he became the leader of the Dalit Buddhist movement. Dalits form Hinduism’s lowest caste. India’s history starts with the arrival of the Aryans, who devised a social system to ensure that not only would they always remain at the top, but they would also own all of the land’s wealth and power. They divided the people into four varna (groups) and assigned duties and obligations to each one. In descending order, the Brahmans (priests), Kshatriyas (rulers, administrators and warriors), Vaishyas (artisans, merchants, tradesmen and farmers), and Shudras (the laboring classes) had their status and privileges fixed at birth. The Brahmans were the super-lords, and the other castes exist to serve them. Members of this caste could do no wrong and thus them by Lord Brahma. The Kshatriyas were the protectors and defenders, the Vaishyas were tasked with producing food and the Shudras served as menials. Those who fell outside this system were known as Dalits, people who were considered untouchable, non-human, impure and unfit for Hindu civilization. This category also includes Jews, Zoroastrians, Christians, Muslims and 7,000 other religious traditions. There are more than 6,000 birth-based sub castes, each of which are socially isolated from and inimical to each other. This ensures that those on the lowest rung will always remain subjugated and exploited. Jainism and Buddhism, both born in the sixth century BCE, challenged this Manusmriti-based system. As a result, thousands embraced these two faiths.

Under Chandragupta Maurya (321-297 BCE), upper caste Hindus killed thousands of Buddhists and Jains and destroyed their places of worship. From the eighth to the 16th century, Islam and Christianity attracted the so-called lower and oppressed castes to their fold. Most of them were the early inhabitants of India before the Aryan invasion.

The Manusmriti-based laws have weakened India while empowering the upper castes to reap the available benefits. It denied knowledge to women, people of lower castes and the untouchables. The upper castes distorted history, destroyed records, eliminated those who opposed them, created their new deities and orchestrated lynching and mass hysteria to ensure their continued hegemony. Neither the RSS, the ruling Bharatiya Janata Parishad (BJP), nor the Hindu religious leaders have ever spoken against the caste system. Instead, they have unleashed violence against anyone who stands against it. Dharam Sansad’s call to commit genocide against the Muslims is no more than a continuation of the upper-caste’s determination to eliminate those who promote egalitarianism. Their hatred of the constitution is proof of their arrogance. Haridwar’s Hindu religious parliament was not an exception to, but rather a continuation of, Hindu history. India is a multi-caste, multi-racial, multi-religious, multi-lingual and multi-cultural country. Its constitution reflects a humanist, universal, rational and scientific vision. The Hindu religious leadership that met in Haridwar has another vision, one of hatred based on its lack of vision and wisdom and its failure to recognize that diversity is the essence of life. No one is born high or low, for all are equal and deserve a dignified human existence. Through their hateful call, Hindu religious leaders unequivocally prove that they do not even understand the meaning of humanity and dignity.

Modi is the first BJP leader who was elected for the second time – using anti-Muslim card after completion of his 5 year tenure, a feat so far achieved by two congress leader Jawaharlal Nehru and Indira Gandhi. Modi has now fully geared up militant wings of all the Hindu fanatic organization for anti-Muslim drive. Consequently, BJP leader Parasad threatened to remove the monuments of Mughal emperor Aurangzeb’s grave. Though, security tightened but will set a wrong precedence and potential threat to the grave of Muslim leaders.

The Yogi Adityanath government in Uttar Pradesh is also backing to change the name of Lucknow to Laxmanpuri and destroy many old historical mosques. A grand temple dedicated to Laxman is already being constructed in Lucknow. Mob set a religious place on fire, pelted stones at Muslim community after installing and idol at Gyanvanpi Mosque. Another religious place Neemuch was set on fire by right wing Hindus after installing an idol on Dargah’s wall. In fact India is repeating the script of Babri Mosque episode by demolishing many Muslim mosques. The Indian courts in many cases through an order of interim injunction locked the mosques and denied the Muslims besides banned the use of loudspeaker / azan.

Fire brand BJP leader Sangeet Som stoked another huge controversy after he confided that the gyanvapi mosque, adjacent to the famous Kashi Vishwanath temple in varnansi would be demolished in 2022 like the Babri mosque in 1992. Mr. Som was involved in Muzaffarnagar communal rights in 2013 but none of the court punished him following the Hindutva policy.

Under the prevailing scenario, India banned Amnesty International for coverage of Human Rights violation in India. Despite Godee media, still numerous coverage of daily Muslim genocides in India, destructions of their holy places and banning on their rituals have surfaced enormously. The general public is inquisitive about the role of the regional and global power? They urge the UNO, global powers, OIC and Muslim Ummah to come forward and immediately stop the Muslims genocide in India before it gets too late.

Syed Ali Haisum Bukhari is student of Defense and Strategic Studies at Quaid-e-Azam University, Islamabad. A research fellow at Pakistan House think tank and Muslim Institute. Author Is Awarded with Letter of Appreciation from New York Chamber of Small Business Corps, USA. He is also serving as the Chairman Youth Affairs of Pakistan Study Circle organized by The Consul. For feedback email at alihaisum.2000@gmail.com

Gyanvapi case: Rumours being spread about shivling to invoke citizens’...