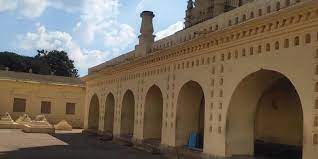 Mandya: The authorities in Karnataka are on high alert as some activists of Hindu organisations said that they will ‘enter’ Jamia masjid in the historical town of Srirangapatna in Mandya district, on June 4 and perform puja there.

The Hindu organisations have also decided to approach the court to demand a survey of the masjid on the lines of Gyanvapi mosque. They have given calls on social media and in various events to participate in the ‘Srirangapatna Chalo’ programme.

Sources said that the authorities are waiting for instructions from the government as to how to handle the devotees who may try to enter the masjid and perform ‘puja’ there.

The district authorities have already beefed up the security in and around the Jamia masjid. They are also contemplating to clamp prohibitory orders from June 3 and extend it to June 4.

Vishwa Hindu Parishad (VHP) and Bajrang Dal leaders, who are at the forefront of the ‘Srirangapatna Chalo’ movement, have said that since the district authorities have not responded to their request, they are going ahead with their plan.

The Jamia masjid authorities have already expressed apprehension and made appeals to the government to protect it.

Built by Tipu Sultan in 1786-87, Jamia mosque is also called as Masjid-i-Ala and is located inside the Srirangapatna fort. The mosque has three inscriptions that mention nine names of Prophet Mohammad (peace be upon him).

The Narendra Modi Vichar Manch organisation which had made submissions to the authorities for survey of the mosque. Web Desk