Subscribe Us
HomeLatest NewsIndia is third most polluted country in the world: Report
Latest News

India is third most polluted country in the world: Report 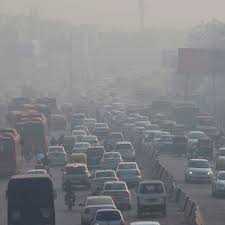 New Delhi: India’s overall pollution levels worsened in 2021 and New Delhi remained the world’s most polluted capital, the data showed. Bangladesh was the most polluted country, also unchanged from the previous year, while Chad ranked second after the African country’s data was included for the first time.

World Environment Day is being observed on 5 June annually across the globe to mark the importance of nature and environment. India is the third-most polluted country in the world and Delhi being the most polluted capital city. India’s push for ramping up coal production would lead to an increase in the country’s methane emissions, second biggest contributor to global warming after carbon dioxide. According to British study “Atmospheric Chemistry and Physics”, hidden air pollutants PM 2.5 along with nitrogen dioxide are increasing in Indian cities.

A study published in the Lancet found that air pollution contributed to 1.7 million premature deaths in India. As per the ‘State of India’s Environment 2021’ report, poor air quality was the fourth leading risk factor for early death worldwide in 2019, surpassed only by high blood pressure, tobacco use, and poor diet. A 2020 report by Greenpeace Southeast Asia estimates 54,000 people died of airborne diseases in Delhi alone last year. Dr Swarupa Mitra, Senior Consultant and Chief of Gynecological and Genitourinary Radiation Oncology at Rajiv Gandhi Cancer Institute and Research Centre (RGCIRC) said a continuous increase in the number of pollutants in air, water and soil are reasons for the rise in cancer cases in India.

Scientists believes that air pollution is driving up death toll in the devastating COVID-19 outbreak unfolding in India. Residents of Bihar are concerned about human corpses in the Ganga river which is responsible for fresh water contamination. The increase in Indian coal mining is deviation from its climate goals and a threat to the whole South Asian states. Web Desk