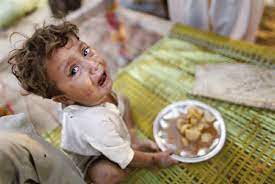 New Delhi: According to food experts and activists, India direly needs to tackle the risk factors for food insecurity to meet its targets to eradicate hunger.

India’s position on the 2021 Global Hunger Index (GHI) report slipped to 101 out of 116 countries, from 2020, when it ranked 94. The government, however, rejected those findings, citing serious methodological issues.

As the globe commemorates World Hunger Day, Purnima Menon, senior research fellow at the New Delhi-based International Food Policy Research Institute, told Anadolu Agency that while the target of zero hunger for India is “challenging,” it is hard to predict whether the country will achieve the target as the “current trends suggest that it could be challenging.”

In 2015, members of the World Health Organisation, including India, adopted the UN’s Sustainable Development Goals, which also targeted zero hunger by 2030.

“The combination of economic slowdowns even before the pandemic, the massive challenges related to the pandemic, and now the challenges of inflation and unemployment are all creating conditions where previous research has shown that food insecurity is likely to rise,” said Menon. “To achieve the zero hunger goals, all these challenges need to be acknowledged and faced and then actions need to be put in place to tackle each of the risk factors for food insecurity.”

According to Menon, the biggest challenge with India’s hunger problem is that there is no clarity about the scale of the challenge.

“Data on food insecurity in India are not available at the scale and frequency that is needed,” she said, adding that smaller-scale surveys that have been made available since the coronavirus pandemic started in early 2020 “have shown that there is a problem and that where surveys have covered vulnerable populations (migrants, urban poor, tribal populations), the findings have shown high levels of food insecurity and poor dietary quality.”

She also noted that addressing food insecurity and hunger requires a range of government policies.

“Social safety nets are a primary policy instrument here and on that front, India has a good set of instruments that include the public distribution system, various cash transfer programs, and more,” said Menon.

She said, however, that policies to tackle the roots of food insecurity would include economic policies related to inclusive job creation, ensuring jobs are available close to vulnerable populations, factors that constrain women’s participation in the economy and agricultural growth policies, and more.

“There is more work happening on the former (e.g., PDS, etc.) and possibly less happening on the latter (the conditions that cause food insecurity in the first place),” she said, referring to the Public Distribution System – a distribution system for grains at affordable prices.

Anjali Bhardwaj, a food campaign activist, told Anadolu Agency that 90% of the country’s workforce is in the unorganised sector and that lockdowns during the pandemic wreaked havoc on the livelihoods of the poor.

“This has resulted in an acute problem of hunger, with people not being able to afford adequate and nutritious food,” she said.

Stating that rising inflation coupled with economic recession means that the situation of hunger and malnutrition is not likely to improve anytime soon, Bhardwaj said the PDS, coupled with the Pradhan Mantri Garib Kalyan Anna Yojana – a scheme to supply free food grains to migrants and poor — has proven to be a lifeline for the 800 million ration cardholders in the country.

“If India is to achieve the target of zero hunger, it is imperative to ensure the universalisation of the Public Distribution System under the National Food security act – this will make sure no one is left out of the food security net or goes to bed hungry,” she said.

Urging the government to comply with the directions of the Supreme Court and immediately increase coverage under the National Food Security Act, she said it is equally critical to expand the food basket under the Public Distribution System to include lentils, cooking oil, and other nutritious food commodities.

In March, the Indian government told parliament that the government “accords high priority to the issue of hunger and provides food grains at highly subsidized prices to the targeted population through State Governments/Union Territory administrations under National Food Security Act (NFSA), 2013 and Other Welfare Schemes.” Anadolu Agency