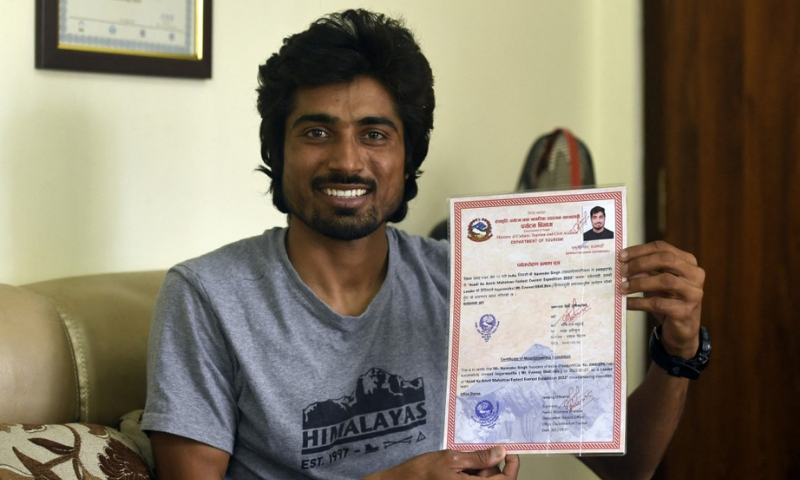 New Delhi: An Indian climber banned from Everest after faking a summit of the world’s highest mountain has successfully scaled the peak for real, telling AFP he returned to “prove” himself.

Narender Singh Yadav claimed to have reached the top of the 8,849-metre mountain in May 2016.

But photos of the 26-year-old at the summit were later shown to have been digitally altered, prompting the Nepal government to revoke recognition of his feat.

Yadav and two other climbers were issued a six-year ban backdated to 2016, and this was the first year he was able to return to the mountain.

“Everest is a dream for all of us but Everest is life for me,” Yadav told AFP.

“There were a lot of allegations on me … that’s why I (had to) prove myself and climb Everest.”

Yadav maintains he reached the summit but that the expedition leader doctored his photos and posted them on social media after he was nominated for India’s prestigious Tenzing Norgay Adventure Award in 2020.

The award was subsequently withheld, an experience Yadav said was “very painful for me and my family”.

His ban ended on May 20. Seven days later, he was on the summit — this time with an ample cache of photos and videos to prove his feat.

“We granted him a certificate `after he presented enough evidence of his Everest summit,” said Nepal tourism department official Bishma Raj Bhattrai.

Pemba Rita Sherpa, a guide with expedition organiser Pioneer Adventure, said that two guides accompanied him instead of the usual one to make sure there were no disputes.

“We took many photos and videos of him,” he said. “We have to speak what is real. It is about our Sherpas’ reputation and the company’s reputation.”

A successful Everest summit is the crowning achievement of any climber’s career, and many go on to forge careers as motivational speakers and authors.

The current system of authentication requires photos along with reports from team leaders and government liaison officers stationed at the base camp — but it has been open to fraud attempts.

An Indian couple were banned for 10 years in 2016 after they published doctored photos purporting to show them at the top of Everest.

The pair — both police constables — superimposed themselves and their banners onto photos taken by another Indian climber at the summit.

This year, a rare window of good weather has allowed more than 500 climbers and guides to reach the Everest summit since a team of Nepali climbers opened the route on May 7.

The Himalayan nation reopened its peaks to mountaineers last year after the coronavirus pandemic shut down the industry in 2020. AFP