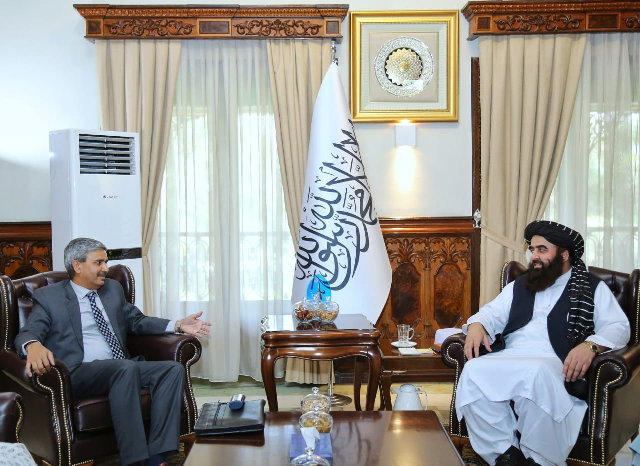 Kabul: Taliban Foreign Minister Amir Khan Muttaqi has termed the visit of an Indian delegation to Afghanistan a “good beginning” in bilateral ties between the two countries.

India has sent a team of foreign ministry officials to Afghanistan’s capital of Kabul for talks with senior members of the ruling Taliban, the first such meeting since the chaotic US withdrawal last year.

FM Muttaqi welcomed the first Indian delegation to Kabul, “calling it a good beginning in ties between the two countries”.

He also expressed gratitude for the recent Indian humanitarian and medical assistance to Afghanistan.

The foreign minister stressed the resumption of projects by India, their diplomatic presence in Afghanistan and the provision of consular services to Afghans, particularly to students and patients, the statement added.

The Indian delegation sought positive relations with Afghanistan as in the past and pledged that they would continue their assistance to the war-torn country, as per the statement.

“India would consider assisting and working with Afghanistan in various fields, and whilst India has recently opened up its borders and ports for Afghanistan exports leading to increased Afghan exports compared to past years, they would provide further facilitates in this area to help Afghanistan further increase its exports and strength its economy.”

Both sides also agreed to expand interactions between the two countries, read the Afghan communiqué.

Poverty and hunger have rocketed in the strife-torn nation since the Taliban took power last year after the United States withdrew.

India has donated about 20,000 tonnes of wheat, 13 tonnes of medicines, 500,000 doses of Covid-19 vaccine and winter clothing, with more medicine and foodgrain on the way, New Delhi said.

The South Asian nation pulled its officials out of Afghanistan last August and closed its embassy, although New Delhi is keen to retain ties with the country where its arch-enemy, Pakistan, wields considerable influence. News Desk