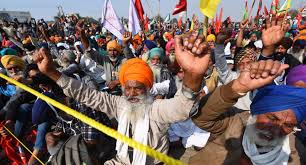 India is, currently, in throes of a son-of the soil farmer’s movement. They have been demanding the repeal of three controversial farm laws at different borders of New Delhi since November 26 last. They perceive the laws as a ploy to divest them of their ancestral landholdings at the altar of corporations (crony capital). Farmers also want an iron-clad guarantee that the market support-price for their crops will not erode.

The laws which are the bone of contention are Farmers’ Produce Trade and Commerce (Promotion and Facilitation) Act, 2020; the Farmers Empowerment and Protection) Agreement on Price Assurance and Farm Services Act 2020 and the Essential Commodities (Amendment) Act, 2020.

According to conservative estimates, over seven lac farmers are squatting at the Tikri (including Jharoda Kalan, Auchandi and Harewali), Singhu and Ghazipur borders, closed to traffic. Over 155 farmers have died braving water cannons and inclement weather. A Sikh saint (holy man) and several farmers have committed suicide against government callousness towards the farmers’ demands. Body of a 52-year-old farmer was found hanging from a tree near Tikri border in Delhi. Police recovered a suicide note from the spot, in which he had written: “The government has only been giving dates after dates [to farmers]. There is no idea when these black laws will be repealed.”

The complexion of the movement is changing as about 18 opposition parties have supported the movement besides the Dalit, a section of women and local students. The Dalit leader, Chandra Sheikhar galvanized the movement by delivering a Gettysburg-like speech `eik jut ho kar larain gay’ (we shall fight untied). He alluded to the minorities’ unsuccessful struggles, often gory, to unshackle the unjust class-based social order, and strive for achieving equality. The widening scope of the farmers’ emancipation movement created the impression that it has been transformed into an all-India oppressed people’s movement. Sensing the changing mood of the movement, the wily Modi unleashed a host of measure to create fissures in farmers’ fraternity, discredit the movement in the public eye by portraying the farmers’ as flag bearers of Khalistan, holding them responsible for hoisting the Khalsa flag (actually unfurled by Modi’s goons) instead of the national flag at the Red fort ramparts. The government even disconnected the water and electric supply, browbeating protesters with a Lashkar of police force perched behind concrete concertina barricades.

The confrontation smacks of a stalemate. The farmers can’t go back empty-handed. And, Modi can’t take off his `Spartacus’ mask that helped him bag electoral laurels. Estranged in marriage, Modi lives all alone in official residence feeding peacocks, to pose as Krishna. He lives the script of Krishan ji Maharaj (Claude Steiner, Scripts Peoples Live). But it appears the pseudo-Krishan has already lost the yuddha by conceding a `hold’ on the three farm laws for one-and-a-half years.

Modi would further lose gusto to fight off farmers (60% of the total population)in state assembly elections due in about the `hold’ period, or next general election thereafter. The portents and the writings on the wall are clear. Modi and his paper tigers including Amit Shah do not even have the nerve to address the farmers´ eyeball-to-eyeball. Yogi Adityanath, saffron chief minister of Uttar Pradesh is distancing himself from Modi, with a squint-eyed on the next Lok Sabha (house of people) elections. Akali Dal has left the Modi coalition. Expect more chinks in “Krishna’s”  armour.

Jallianwala 2: The movement has a narrow agenda. It could end one fine morning with Modi agreeing to farmers’ demands. If he does so the movement loses its potential to become an all-India voice of the oppressed people. If he stays put, wheel jams may progress into marches toward the parliament and encirclement (gherao), of official buildings. If police open fire, it would be Jalaianwala Bagh2.

Banda Bahadur (16 October 1670 – 9 June 1716): Could the movement throw up a Banda Singh Bahadur (Lachhman Dev alias Madho Das Bairagi) to steer the movement? Bairagi was a phenomenal product of oppression all around.

He abolished the then prevalent Zamindari and Taluqdari system that reeked of extortion and corruption. He made farmers owners of the land that they tilled. Bahadur abhorred injustice and passive obedience to authority.

An anecdote tells that that some villagers from the neighborhood of Sadaura attended him with a petition against the extortionist practice of their landlords. Instead of sympathising with them, Bahadur ordered them to be showered with bullets. Later, he told the astounded survivors that they deserved the treatment he meted out to them. They should be ashamed that they outnumbered a handful of zamindars. Yet, they could not teach a befitting lesson to their landlords.

Despite a lack of resources, Bahadur valiantly fought against the Mughals and defeated the Sayyids and Shaikhs in the Battle of Sadhaura. His other battles include Sonipat (Khanda), Samana, Mustafabad, Malerkotla, Saharanpur, Jalalabad, Muzaffarnagar, Lohgarh, Jammu, Rahon, Jalalabad, Nangal, Gurdaspur, Sirhind and Chappar Chirrri. A 328-feet tall (taller than Qutub Minar) memorial was built at Fateh Burj to commemorate the Sikh victory at Chirri.

Weaknesses of the farmers’ movement

The government buys wheat from the farmer at Rs 20 a kilogram and rice at Rs 24 a kg. The government is unwilling to pay more. The farmers earn about Rs 20,000 a year. Outside the farm, they can’t earn even this Rs. 1666 a month. So they have to be prisoners to their farms.

It was nice to see the sikh protective cordons around Muslim protesters offering prayers. But, will this inter-caste, inter-faith bonhomie change caste-based social order. The caste order (varna, avarna, savarna jati system) is rooted in religious texts, Rig Veda, Bhagvad Gita, Manusmriti and other smritis. Rig Veda postulated the theory of Chaturvarna (purushashakta). A stanza in Rig Veda states: `His mouth was the Brahmin. His two arms were made the warriors, His two thighs that which was the Vaishya, from His feet was born the shudra.

The Bhagavad Gita upholds the Varna jati system. Lord Krishna states: `I myself have created the arrangement known as Chaturvarna assuring them different occupations in accordance with native capacities’. The Manusmriti converts the Varna into caste systems by sanctifying endogamy (marriage within caste) and social separation.

In Mahabharata, Bhishma preaches: `The highest duty of a crowned king is to worship Brahmins. Ramayana’s author tells us that Shambuka was sacrificed because his behaviour deviated from the caste codes. Shambuka, a shudra ascetic, was slain by Rama for attempting to perform penance in violation of dharma, the bad karma resulting from which caused the death of a Brahmin’s son.

To disperse the farmers, Modi is likely to exhibit a `flight’ response in fight-or-flight mode (fighting animal’s response). If the movement, now in flux, dissipates, it would be a tragedy. If it turns into a rights movement for all the oppressed, it would be the most cataclysmic event in the Hindu social order.