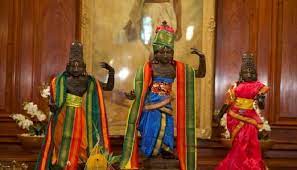 Madhya Pradesh: An Indian man “upset” with God for making his family ill damaged Hindu idols in a temple and got arrested, reported NDTV.

Vinod Kumar, 27, from Greater Noida, Madhya Pradesh, India, was arrested after an FIR was lodged against him by a resident of the area.

Kumar was angry about his family being sick for the past few years.

The police reported that three idols were vandalised. There was no priest in the temple so the police acted on the resident’s complaint and deployed policemen at the site. “After the matter was investigated, the accused was arrested” a police spokesperson said. “The tools used by him to damage the idols were recovered,” they added.

The accused told the police that his wife and son have not been well in the past three years. He said that he had been asking the gods for their health but it did not improve. His aunt had also passed away which left him depressed.

Kumar confessed to the crime. Frustrated and upset with the circumstances, he used a hammer and chisel to damage the idols. Web Desk