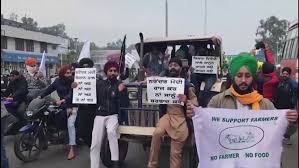 Over the past seven weeks, there have been widespread international protests, including in the United States, Canada, the UK, Australia, and New Zealand, in support of the now 45-day-long agitation Indian farmers are mounting against the Narendra Modi-led Bharatiya Janata Party (BJP) government’s pro-agribusiness laws.

In September, the Hindu supremacist BJP rammed through parliament three pro-corporate farm laws, as well as a labour “reform” that illegalizes most worker job action, promotes precarious contract labour jobs, and empowers large companies to lay off workers at will.

The farmers’ protest has evoked widespread sympathy among working people and youth across India and internationally. It was launched on Nov. 26, to coincide with a one-day general strike against the Modi government’s pro-investor policies that was joined by tens of millions of workers.

The popular hostility to the Modi government has been exacerbated by its ruinous response to the coronavirus pandemic. India is currently second to the United States in the total number of COVID-19 infections, and, at just over 150,000, third in deaths. The government’s ill-prepared pandemic lockdown, which left hundreds of millions of Indians without any income overnight, has led to an unprecedented economic crisis. Tens of millions of jobs have been lost, and nearly two-thirds of rural households have reported a loss of income.

The farmers are demanding the repeal of the three pro-agribusiness laws and a legal guarantee that the existing Minimum Support Price system (MSP), under which the government commits to purchase basic crops at a guaranteed price, will be maintained. Because it is determined to meet the longstanding demands of domestic and global capital for the neo-liberal restructuring of Indian agriculture and because it fears significant concessions to the farmers would galvanize social opposition, above all from the working class, the BJP government has offered only cosmetic changes to the farm bills and a worthless paper pledge to maintain the MSP.

According to the Indian news source JagranJosh.com, the MSP-determined prices for the 2020-2021 season for corn, yellow soybeans and medium staple cotton were respectively 1,850 Rs (approximately 25.29 USD), 3,880 Rs (approximately 53.04 USD), and 5,515 Rs (approximately 75.38 USD) per quintal (100 Lbs). The dismantling of the MSP would further slash the incomes of tens of millions of small farmers, many of whom have plots of two hectares (about five acres) or less.

The Modi government mobilized thousands of security personnel, including paramilitaries, and used water cannon, tear gas, and mass arrests against the farmer’s agitation at its launch on Nov. 26-27. It succeeded in preventing the farmers from realizing their objective of reaching Delhi, India’s capital. But to its dismay, tens of thousands of farmers, many with their families, have camped on the borders of India’s National Capital Territory ever since, disrupting traffic on half-a-dozen major highways.

The BJP has attempted to isolate the farmers and lay the political groundwork for further repression by slandering the agitation, with claims it is being backed by “anti-national” forces, including China and Pakistan. It has also falsely and provocatively claimed that the farmers are being manipulated by the Punjabi-Sikh separatist Khalistan movement.

Protests in support of the farmer’s Delhi Chalo (Let’s go to Delhi) agitation—many in the form of caravans due to the COVID-19 pandemic—have occurred in urban centers around the world. These include London, England; Sydney, Brisbane, and Melbourne, in Australia; Auckland, New Zealand; San Francisco, Sacramento, and the Detroit area in the US; and Vancouver, Toronto, Ottawa, and Winnipeg, Canada.

The response by Western capitalist governments has ranged from a calculated “neutrality” to hypocritically feigned support for the Delhi Chalo protestors.

Seeking to curry electoral favour with Canada’s large East Indian immigrant population, Liberal Prime Minister Justin Trudeau has voiced “support” for the farmers, and angered Modi by calling on him to respect protesters’ democratic rights. This is the typical stuff of bourgeois political huckstering. Trudeau and his government have been deafeningly silent on the Modi government’s constitutional coup and massive security crackdown in Indian-held Kashmir. Moreover, Canada, like the US, has repeatedly denounced the MSP and other Indian agricultural regulations as obstacles to the “free market” before the World Trade Organization.

A December 24th New York Times article by Jeffrey Gettleman and Pranshu Verma speculated that an incoming Joe Biden administration is “likely to be more critical of India’s human rights record,” than its predecessor, while conceding that the central concern of Biden, like Trump, will be to expand the Indo-US military-strategic partnership. The Obama-Biden administration, it need be recalled, had no problems closely collaborating with Modi, who presided over the 2002 anti-Muslim pogrom in Gujarat, when he became India’s prime minister in May 2014—all in the interests of further integrating New Delhi into Washington’s military-strategic offensive against China.

On December 20th, a rally in support of the Indian farmers took place in Troy, Michigan, a city in the metropolitan area of Detroit. It occurred at the city’s Community Center, and it followed a similar protest on December 5th at Heritage Park in the city of Canton, which is another satellite city of Detroit.

Arvind Singh, an attorney living in Plymouth, Michigan, told the Troy rally, “Right now in the Indian capital, for 15 kilometers, you have peaceful farmers of all states and all backgrounds united as one. The farmers and the laborers are in unity. We are here today to stand in solidarity with farmers there and everywhere for the right to protest, the right to free speech, and the right to assemble, which is being trampled on by the Indian government.”

Singh spoke with the World Socialist Web Site outside of the Dec. 20 rally.

“My family is from India, and I stand with farmers right now. I have travelled to India to try to keep my familial connection going.

“The benefactors of laws passed by Modi’s administration are very plain,” Singh said. “You can very clearly see who’s winning and who’s losing. Mostly, the laws enrich a handful of large corporate entities at the expense of everyone else. Actually, it’s just five wealthy Indian families, including the Ambani family (headed by India’s biggest billionaire, Mukesh Ambani). Big companies are already building cold storage facilities to hoard large supplies of grain, which they previously weren’t allowed to do. This will obviously disrupt the market hugely.”

Singh continued to describe the protests in India. “Although there is a large percentage of participants who are Sikh, the protests have not at all been organized by religion. People are largely putting aside communal differences and standing together in solidarity… The slogan has been ‘Kisan Majdur Eka Zindabad,’ which translates to ‘Long Live Farmers and Laborers United’.”

He continued, “it has been a peaceful atmosphere, and everybody is in a positive spirit, despite the dangerous cold front which has struck the region right now. People have been bringing their things in tow and feeding one another, planting crops along the highway as they march to the Delhi. They have been playing games, giving speeches and dancing to keep morale up, and local residents have been supporting them and providing resources as they pass through.”

The WSWS reported earlier this month that in addition to harsh weather, demonstrators faced additional health hazards when the government intentionally cut off water supply at protest locations.

Referring to the December 5th protest in Canton, Singh reported that there were over 500 cars present in the caravan demonstration, and over 800 people in the center of the parking lot at Heritage Park. “Many more people didn’t come out of their cars out of concern for Covid, but they were there in support.” he said.

“In this area, there are at least 10 to 15 thousand Sikh Americans. There are Gurdwaras (Sikh religious institutions) all over the city, and many of their representatives were present at this event. Several Punjabi support groups were there, as well as representatives of some Sikh-owned corporations.”

Supporters of the Indian farmers’ struggle against big business’ drive to “modernize” agriculture at the expense of the rural toilers and opponents of the Modi government’s assault on democratic rights must recognize that the only social force that has the power to defeat capitalist reaction is the working class, armed with the program of international socialism.

Only through the establishment of a workers’ government, the expropriation of the fortunes of India’s top 1 percent, who own more than half of the country’s total wealth, and the placing of basic industry and the banks under public ownership and the democratic control of working people will it be possible to mobilize the vast social resources needed to provide farmers and the landless and agricultural workers (who compromise the largest and most exploited section of the rural masses) a decent standard of living, and quality health care, education and public services.

To prosecute this struggle requires the development of an independent political movement of the working class in struggle not only against the parties of Indian big business, but also their aiders and abetters in the Stalinist parties and the pro-capitalist trade unions. While mouthing words of support for the farmers’ agitation, the Stalinist Communist Party of India (Marxist) or CPM and Communist Party of India (CPI) are doing everything they can to keep the working class on the sidelines, prevent it from intervening in the political crisis as an independent force, and restrict the farmers’ agitation to futile appeals to the BJP government to change course. They are seeking to tie the swelling mass opposition to Modi and the “pro-investor” policies all Indian governments have pursued for the past three decades to the big business Congress Party and other right-wing opposition parties.wsws.org