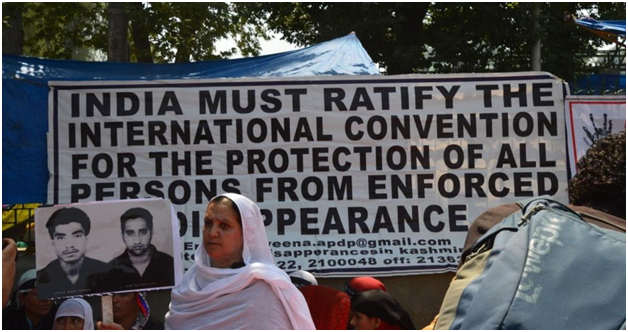 Srinagar: The Association of Parents of Disappeared Persons expressed “serious concern” over the potential misuse of sensitive documents and devices seized by the National Investigation Agency (NIA) after its investigators raided the group’s office in Hyderpora, Srinagar. The group said the NIA seized files that contained records about the alleged human rights abuses by security personnel in the Valley.

The APDP is a human rights organization based in Jammu and Kashmir that provides assistance to the families of victims who have been subjected to enforced disappearances allegedly by security forces during three decades of conflict in the region. It was founded by human rights activist ParveenaAhangar. Her teenage son was allegedly abducted by the Indian Army around the time of the onset of militancy in Kashmir in the 1990s.

In a statement, the organization said that the NIA along with the Jammu and Kashmir Police and personnel of the Central Reserve of Police Force conducted searches at the office for six hours. The team examined all documents relating to APDP’s work and subsequently seized several documents and some electronic devices. Ahangar’s mobile phones were also seized, APDP said.

The group said there was a “grave apprehension” that the same may be accessed by other government agencies, and could lead to “adverse consequences and reprisal against victims and families” who have testified against security personnel.

“More than 1,000 testimonies of enforced disappearances, about 400 testimonies
of pellet gun injuries, about 300-400 testimonies of arbitrary detention and torture and
some cases of sexual violence have been documented by APDP and have been submitted
to various United Nations special procedures, and Human Rights Organizations.”

Last month, the APDP had submitted around 40 testimonies of victims who were allegedly subjected to arbitrary detention and torture by security forces in Kashmir to the Working Group on Arbitrary Detention and the UN Special Rapporteur on Torture.

The NIA carried out searches at multiple locations in Kashmir, including residences of human right activists, a journalist and the premises of NGOs and a local daily.

The raids were carried out early this morning by the central agency in Srinagar and at one location in north Kashmir’s Bandipora district. Apart from this, one location in Bengaluru was also raided.

The police said the searches were related a case pertaining to certain “so-called NGOs” and trusts that are allegedly raising funds in India and abroad in the name of charitable activities and using them for “secessionist activities in Jammu and Kashmir.”

Athrout said that NIA investigators had visited the organization’s office and posed a “few queries” regarding their work. The group said the officials questioned them in a “very friendly & professional manner & all the required details were provided accordingly & transparently”. Scroll.in

India using molestation of women as a weapon of war...