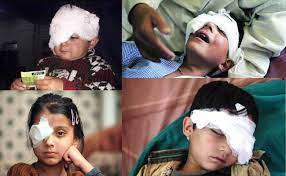 The world observed International Day of Innocent Children Victims of Aggression on every June 4 since 1982.

The purpose of the day is to acknowledge the pain suffered by children throughout the world who are the victims of physical, mental and emotional abuse. This day affirms the UN’s commitment to protect the rights of children.

Children in IIOJK are living in the most militarized zone of the world. The presence of 900,000 troops, which exposes children to the risk of all six grave violations against children as laid out in the United Nations Convention on the Rights of the Child. UN Secretary-General Antonio Guterres has also shown concerned by grave violations in IIOJK and asked the Indian government to end the use of shotgun pellets against children.

According to Khurram Parvez, a human rights activist, children in Kashmir are witnessing two types of violence: “The first type is when they are directly affected by killing, torture, arrests; the second is when they see their families suffering, these children cannot lead a normal life”. Their life is shaped by a sense of injustice, and the tendency to accept violence increases with time. All these things have a negative impact on their mental health.

Hundreds of Kashmiri children have been killed by Indian army during the last three decades while thousands of others have lost their parents and many have passed their childhood in the Indian detention cells without any fault. In IIOJK, Indian troops in their unabated acts of state terrorism have martyred 904 children during the last 33 years. 904 children were among the 96,054 Kashmiris martyred by Indian troops from 1989 till date.

The killing of civilians by the troops rendered 107,860 children orphaned in the territory during the period. Hundreds of boys and girls aged below 20 have been martyred during Cordon and Search Operations and fake encounters, while a large number of them are facing illegal detentions under black laws in different jails of the occupied territory. India is the worst country in the world as its human rights record is below those countries that have been declared as rouge nations by the UN.

International community must play its part to help oppressed children in IIOJK and urged India to immediately stop its illegal and inhuman policies and practices that are in contravention of its own obligations under the international law.

Google cancelled Dalit activist’s talk on caste after pressure from...

2 UN peacekeepers killed in 6th incident in Mali in...