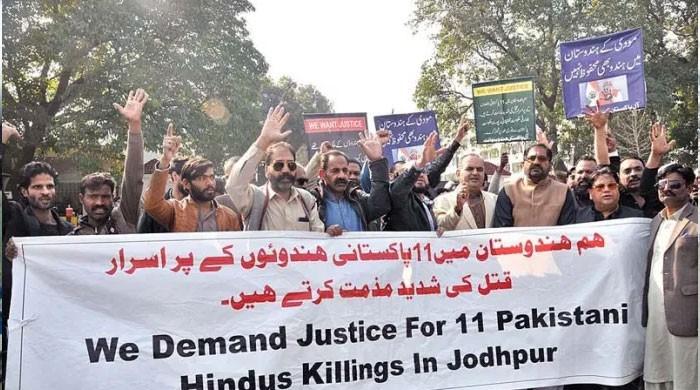 Islamabad: The leaders of the minority community have demanded of the Indian government to immediately arrest the killers of 11 Pakistani Hindus in India, condemning the Modi regime’s blithe response to provide justice to the victim family.

They were addressing a webinar on “India for selected Hindus only” held here and attended by Hindu leaders along with family members and relatives of 11 Pakistani Hindu citizens who had been killed in Jodhpur India on 9 August 2020.

The members of the victim families said the killers of their dear ones were roaming freely in India and sought justice by apprehending the killers and bringing them to the task.

MNA Ramesh Kumar said the government would try its utmost to get the killers arrested and that he would also contact the Hindu Council.

He said the protection of minorities was the government’s responsibility, and that he would also take up the matter with the Indian High Commission. Moreover, the issue would be raised at every platform to provide justice to the family.

MNA Wasim William urged the UN Security Council to help provide justice to the victim’s family which had not yet received the bodies of their dear ones.

He said even the FIR was not yet registered for the crime and even the women were made subject to third-degree torture by the police.

Punjab MPA Mahrinder Paul Singh urged the government to take up the matter at every forum as the state was responsible for minority community’ protection.

Haroon Sadial said India was not even sparing Hindus going from Pakistan and called for practical measures to ensure killers’ arrest.

Qatar renews commitment to ensure participation of women in United...