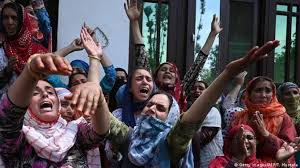 In a tweet, he said lying foundation stones of hydroelectric projects in Occupied Kashmir is a violation of Indus Waters Treaty.

It is pertinent to mention here, on 24 April 22, PM Modi made first visit to IIOJK after abrogation of Articles 370 & 35A in 2019. A day prior to PM Modi’s visit to IIOJK, Indian armed forced assassinated six innocent Kashmiris in different parts of occupied valley.

However, his visit was intended to deceive the public and present a false sense of normalcy in IIOJK. PM Modi inaugurated different projects of worth US $ 2.6 billion. Arab countries’ investment in IIOJK is considered as a big triumph for India in its attempt to legitimize its control in the region. On the other hand, locals rejected this proposal and marked “Black Day” across the occupied valley. Affluent Indian expats in Kashmir were forced to bring investment after their arms-twisted and they were forced to pretend and promote their feeling of normalcy in Kashmir.

BJP government has deftly enlisted help of UAE and Saudi Arabia to invest in this war-torn region to exert influence over Pakistan. This is not just an investment; it is also a support of India’s position on Kashmir, as well as an outright rejection of Pakistan’s position. 850 MW Ratle Hydroelectric Project is a controversial power project which is being built on Chenab River.

Earlier, India was bound to take clearance from the World Bank due to dispute between India and Pakistan under the Indus Water Treaty. BJP government has kept a tight grip on the situation in IIOJK after adoption of controversial laws and policies of changing demography of Muslim majority region. RSS is not comfortable with Muslim majority state of Kashmir. Modi being grown up through the ranks and files of RSS is desirous to change fundamental Muslim character of Kashmir by appointing Hindu Chief Minister of IIOJK instead of Muslim. Web Desk