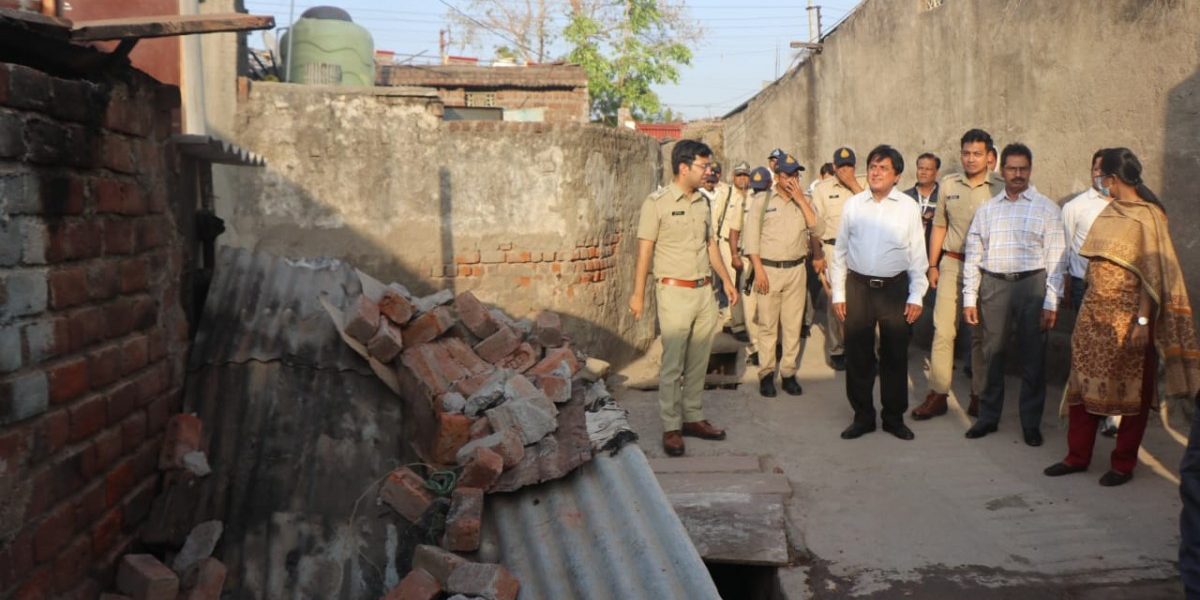 New Delhi:  The Indian police registered around 72 cases and arrested nearly 200, including several minors in the aftermath of the communal violence that broke out in Madhya Pradesh’s Khargone on April 10.

In connection with stone pelting, arson and violence, 12 minors were sent to a juvenile correctional home in Khandwa after their remand at the Khandwa police station. Two brothers – 15-year-old Omair* and 17-year-old Mirza* – were among those arrested on the intervening night of April 11-12 and sent to the correctional home in Khandwa on April 14. Walking out of the facility after over 30 days, the boys allege physical violence, targeted harassment and denial of food and water.

“Bhajans were played on a mobile phone and we were made to sing those songs. We were given the Gita Gyan and were made to read it,” said Mirza. “There were 12 of us there and more boys in general, we had to make do by drinking water as we were not fed adequately. They made us do chores, asked us to sit like chicken and then beat us up too.”

Mirza and Omair allege that they suffered serious injuries while they were kept in the correctional home.

When asked the names of the officers responsible for the violence, Mirza named a certain “Bhim”. He added that they were asked questions about namaz and about people eating on the same plate. “We told them about our practices, but we were told you all eat on the same plate at weddings to conspire.”

Documents accessed by The Wire state that the youth were named in an FIR pertaining to Sections 147,149,436, 435, 427 and 336, among others, amounting to rioting, arson and mischief with intent to cause harm.

Speaking to The Wire, the boys’ advocate M.A. Khan said, “Maximum number of people were charged with section 436 amounting to arson, the case against Mirza and Omair is the same. Amid the cases we have noticed a pattern of several loopholes – including how a man who had died two years ago is also named as an accused.”

“In the case of a masjid being set on fire, Muslims have been named. Several lacunae can be seen pertaining to this investigation too, the youth were kept in the correctional homes longer than the stipulated time period and the boys have also reported violence in custody.”

He added, “We spoke to other children too, however, they appear to be traumatised as of now. These are the only examples of custodial violence as far as the minors are concerned.”

The two boys’ bail application was first rejected by the juvenile court, after which they had to approach the sessions court. Khan said they had to make another plea for bail despite some sections of the complaint being those wherein immediate relief can be sought.

“The kids had never even been touched by their parents, let alone being beaten up,” says their grandfather, determined to achieve justice for the violence his grandchildren suffered. “We had nothing to do with what happened [the communal violence], yet my family is suffering enormously.”

The grandfather of the minors and another relative have filed a complaint with the police detailing how 8-10 policemen barged into their homes and hurled abuses at them, inflicting violence and taking away minors. The family in its application has pleaded that their home was far from the site of the communal violence

Speaking to The Wire, the mother of the two boys stated, “My sons are traumatised, they are scared and physically hurting. They have pains in their chests, their backs and their legs where they were hit. Their lives are on the line now.”

The Wire reached out to the Inspector of Town at the Khargone police station B.L. Mandloi with the family’s claims. Mandloi categorically denied any allegations of physical violence in custody or at the correctional home in Khandwa. He went on to state, “There was no violence that has happened with any youth, I can confirm that minors were sent to Khandwa however, no physical violence occurred.” When asked about the number of youth taken to Khandwa, Mandloi said that he was not sure.

The Wire also tried to reach out to the correctional home in question, but the phone call did not connect.

Omair and Mirza were not the only people taken away from their home. Adults including their father and two uncles were also taken into custody the same night. The men are currently lodged in the state’s Mandaleshwar jail as the case against them is ongoing.

The family is involved in running multiple small businesses including in hardware and set up stalls at state fairs. The wife of one of the boys’ arrested uncle’s told The Wire, “I was visiting my sister’s in-laws when the violence broke out. On the intervening night of April 11-12 the police barged into our home at 1 am. They dragged out my husband’s brothers. Amidst this my husband fainted and he too was dragged out. The men were stripped and beaten up, we could hear them crying and screaming. It has been over a month, we are trying to bring them back,” she said.

Earlier this month, women in the region had also taken out a protest march demanding that the innocent minors who had been taken into custody be tried fairly and released immediately. The protestors had alleged that youth were being hauled into custody without a fair probe and proper identification.

Members of the Jama’at Islahul Muslimeen, coordinating the family’s case, alleged that the investigation in the case is one-sided and is not being done in a fair manner. A member of the organisation said, “Youth were deliberately targeted and taken into custody, many are scared to speak up and some have cases against other family members which are ongoing. One of the boys was traumatised to the extent of attempting suicide but was rescued in time. We are discovering a pattern of how these boys were kept in the stations without a proper probe and then sent off to jails.”

On April 10, communal violence broke out in Khargone as processions celebrating Ram Navami passed through Muslim-dominated localities. In the aftermath of the violence, the state government had razed homes of those it claimed were involved in stone pelting and attacking the Hindu procession.

Previously, a fact-finding team comprising representatives of eight political parties had held the state government and the district administration directly responsible for the communal violence. The team also said that action has largely been one-sided and police had failed to restore peace a good 15 days after the incident. The Wire