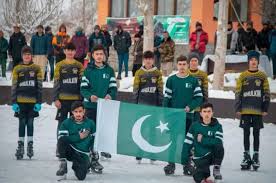 Pakistan is a country that loves sports the most. Most of us might only know the country as a cricket powerhouse. However, Pakistan also actively participates in various sporting activities being held at international level as well. The popularity of sports is immense in Pakistan and games like Cricket, Hockey, Squash, Badminton, Tennis, Snooker, Soccer and traditional games Kabaddi and Polo mostly played and liked across Pakistan. Annually different sports events and festivals including ‘Pakistan Sports Festival’ in tribal areas, Winter Sports Festival in Malam Jabba Ski Resort, Swat, Naltar Winter Resort in Gilgit-Baltistan (GB), KP’s Galiyat Snow Festival and Shandur Polo Festival’ are being organized throughout the seasons across the country which not only offer a healthy environment but also attract millions of local and foreign players, athletes and tourists.

The Pakistan Sports Board that was created in 1962 now controls all 39 Sporting Federations under the backing of The Ministry of Culture, Sports and Tourism to promote and develop uniform standards of competition in sports in Pakistan comparable to the standards prevailing internationally and regulating and controlling sports in Pakistan on a national basis.

Enemies of Pakistan are trying their best to defame the country as hub of terrorism and that it is insecure for international sports events. However, over recent years there has been an increase in sporting activity in Pakistan, with Pakistani sportsmen and women participating at many national and international events. Also, more international tournaments now take place in Pakistan. The size of the teams Pakistan sends and the number of events they participate in the Olympic Games, Asian Games, World Games and Commonwealth Games has increased since the turn of the century.

It can be judged from different sports events and festivals across Pakistan that how much the natives of this country are sports loving. Mega sports events even take place in tribal areas which are normally labeled as sanctuaries of terrorists by enemies of Pakistan. This year from February 1 to March 23, a healthy festival ‘Pakistan Sports Festival’ was jointly played in tribal districts of Khyber, Mohmand and Bajaur in which more than one thousand teams and more than ten thousand players participated in games like cricket, football, volleyball, basketball, badminton, table tennis and athletics competitions.

Along with Champions of Squash, Cricket, Snooker and Hockey, Cricket is the far most popular sport in Pakistan with numerous records and players with global fame. However, the whole world witnessed that international cricket was brought to an end in Pakistan for more than a decade after a RAW sponsored terrorist attack on the Sri Lankan team in Lahore on 3 March, 2009. While not an international match, the 2017 Pakistan Super League final was undoubtedly the biggest game played in Pakistan since 2009, and the biggest gamble too. Thereafter, the holding of nine games of PSL 2018 in Pakistan, even in the wake of heightened military tensions with India, represented an important step towards the stated aim of holding the entire Pakistan Super League in Pakistan. Later, on World XI vs Pakistan was also successfully and peacefully played in the country paving way for complete resumption of international cricket in Pakistan. The relentless struggle by government of Pakistan and Pakistan Cricket Board (PCB) the international cricket was returned to Pakistan and cricket teams of Sri Lanka, West Indies, Bangladesh, Zimbabwe, Afghanistan and Kenya visited Pakistan for cricket series which were peacefully completed.

All matches of PSL were played in the country during the current year and the cricket team of Australia which was earlier reluctant to play in Pakistan has also recently visited Pakistan for six-week tour in Feb after 24 years. Those who did remain wary, but when they took the field realised the rewards of playing in the country. Because the love and craze of Pakistani people for the sports is awesome and can be seen in any ground of sports across the country especially during international matches. Recently, during a match in Qaddafi Stadium, Lahore, UK cricket players David Malan has also endorsed the love of Pakistani crowed for sport in these words “It was as good an atmosphere as I’ve ever been involved in. It was the first time since long I’ve stood on the boundary and heard the crowd chanting my name as a player, it was fantastic. You could see how much it (sports) meant to the people of Pakistan”.

Pakistan is a sports loving nation with a plethora of talent in small towns, villages, and cities; these naturally talented, physically strong and attractive young players of cricket, hockey and football have the ability and capacity to draw crowds and fill stadiums in sporting events anywhere in the world. All sports festivals across the country in various areas and in different seasons especially in northern areas not only promote tourism potential of the country but also portraying a softer image of Pakistan to the rest of the world negating the enemies propaganda against Pakistan.

The Author is media scholar and freelance journalist faridfaiz@hotmail.com

Image of Sheikh Abdullah replaced with national emblem in IIOJK...