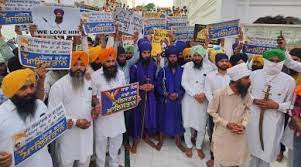 Amritsar: More than 6,000 Indian troops have been deployed in Amritsar to target the Sikh youth ahead of 38th anniversary of “Operation Blue Star”.

There is an atmosphere of tension in Amritsar district of Indian Punjab. The police have a tight guard. The whole city has turned into a cantonment. Anniversary of Operation Blue Star is being observed on June 6. Dal Khalsa has announced to take out Azadi March.

Police force has been deployed in every corner of Amritsar city since Friday evening. Shutdown in Amritsar has been announced for 6th June, due to which the entire city has been converted into a cantonment.

While Dal Khalsa has announced Azadi March and Amritsar Bandh, the police force is continuously taking out flag marches to give a message of warning to the Sikhs in the city. On Saturday also, flag marches were taken out in different parts of the city. Police and paramilitary forces are stationed at every square intersection.

Sikh diaspora across the world and especially those living in Europe and North America has found a new spirit to contest Indian hegemonic attitudes and browbeating of the proud Sikh community.

Sikhs have been awaiting justice for the missing members before and after the operation, destruction of their holy place of worship, Sikh Reference Library, killing of thousands of civilians who had gathered inside Golden Temple just to pay obeisance at the Temple and also for the thousands killed during the anti-Sikh pogrom in Delhi and other parts of India. Web Desk