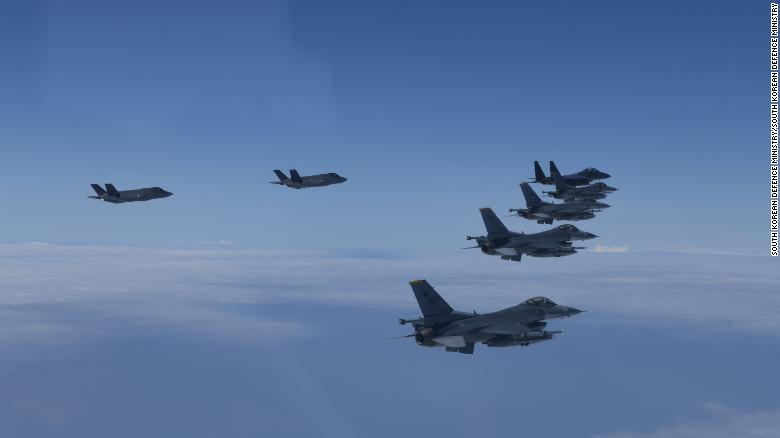 The allies sent the jets — South Korean F-35A, F-15K and FK-16 fighters and US F-16s — over the Yellow Sea, known as the West Sea in South Korea, on Tuesday morning following North Korea’s launch of eight short-range ballistic missiles on Sunday.

Fighter jets from the South Korean and US air forces fly over the Yellow Sea, or West Sea, on Tuesday morning.

Fighter jets from the South Korean and US air forces fly over the Yellow Sea, or West Sea, on Tuesday morning.

“South Korea and the US have demonstrated their strong ability and will to strike quickly and accurately against any North Korean provocations by demonstrating their combined defense capabilities and posture through this combined air force demonstration flight,” South Korea’s Defense Ministry said.

The flights came amid renewed fears that Pyongyang is on the verge of carrying out a new nuclear weapons test.

The International Atomic Energy Agency (IAEA) said on Monday that North Korea may have opened an access way to its underground nuclear testing site.

That report follows an assessment from US military and intelligence agencies last month that North Korea could be ready to resume underground nuclear testing at its Punggye-ri site, based on satellite images showing signs of personnel and vehicle activity there.

Punggyeri, which has been the site of all six of North Korea’s nuclear tests to date, was partly dismantled in 2018 as part of an agreement between Pyongyang, Washington and Seoul.

North Korea’s nuclear weapons program has been banned by the United Nations, and Pyongyang has not tested a nuclear weapon since 2017.

South Korea and the US responded on Monday with eight missile launches of their own, the third time time this year they have staged tit-for-tat missile tests.

Twenty fighter jets, including South Korean F-35As, F-15Ks and KF-16s  and US F-16 jets, take part in an aerial show of force to North Korea on Tuesday morning.

Twenty fighter jets, including South Korean F-35As, F-15Ks and KF-16s and US F-16 jets, take part in an aerial show of force to North Korea on Tuesday morning.

Displays of South Korea’s fighter jet arsenal are not uncommon.

Twice this year, Seoul has shown off its fleet of F-35A stealth fighters, with dozens of the jets lining up on a runway in what the military refers to as “elephant walks” — a display of hardware meant to send a message to potential adversaries.

Seoul’s tone toward North Korean aggression has toughened since the election of new South Korean President Yoon Suk Yeol, who took office on May 10. Yoon has consistently emphasized his desire to strengthen the South’s military — a departure from predecessor Moon Jae-in, who had promoted dialogue and peaceful reconciliation.