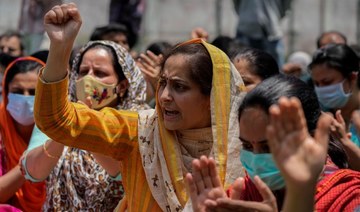 New Delhi: Representatives of a Hindu minority in Indian-controlled Kashmir said that they will begin leaving the region themselves if the government refuses to relocate them to a safer place following a recent series of deadly attacks on community members.

Hindus in the Kashmir Valley, known locally as Pandits, have been taking to the streets since last month, protesting against the local administration, which they say has failed to provide them with security in the disputed Muslim-majority region.

At least 17 Kashmiri Hindus have been killed in the valley since August 2019. In the most recent incident, a Pandit teacher was shot dead outside her school in Kulgam district on Tuesday — less than a month after a government employee and community member was murdered in nearby Budgam.

Tuesday’s killing sparked another wave of fear and protests, with hundreds of Pandits blocking highways in Kulgam and Srinagar, the region’s main city, to demand relocation from the valley.

“We want to be relocated so that we save our lives, our families are safe and our children are safe,” Sunil Bhat, a Pandit community member and local administration worker, told Arab News.

He said that after community members announced they would begin leaving the region on Thursday, neighborhoods where they live were sealed off by police. Local media footage also showed checkpoints and security forces blocking entry points to the areas.

“The government has sealed our areas where Kashmir migrant families live so that we don’t come out,” Bhat said. “We have to leave to save our lives. We have been telling the government to take us away from here.”

Most Pandits, about 200,000, fled Kashmir after an anti-India rebellion broke out in 1989. About 5,000 returned after 2010 under a government resettlement plan that provided jobs and housing.

Sanjay Tickoo, who heads the Kashmiri Pandit Sangharsh Samiti — the largest Kashmiri Pandit group in the region — said that the government “should accept the situation is not good.”

Problems multiplied after New Delhi stripped the region of its semi-autonomy in August 2019 and cracked down on political activity. A series of administrative measures allowing more outsiders to settle in Kashmir also raised fears of an attempt to engineer demographic change in the Muslim-majority area.

“If they want to bring normalcy in the valley, the government will have to hold dialogues with the main political parties, which have been sidelined since August 2019,” Tickoo said.

Others say the security situation has worsened since the abrogation of Article 370 of the constitution, which granted Kashmir special autonomous status.

“Nothing good has happened to us after the removal of Article 370,” Sandeep Kaul, a Kashmiri Pandit whose family has been living in the valley for generations, told Arab News.

“All Pandits are living under fear. They don’t want any more killing.”

However, Hina Bhat, spokesperson for the ruling Bharatiya Janata Party, said that there is no plan for any relocation.

“The BJP government is doing everything to protect them and take care of the Pandits,” she added.

“Displacement would be against the policy of the government, and ever since we have come to power, we are working to create a situation where they can live peacefully and securely.”

But community members do not feel safe.

“We are feeling so insecure that we want to leave the valley,” Ashvin, a Kashmiri Hindu who requested anonymity, told Arab News over the phone from the valley.