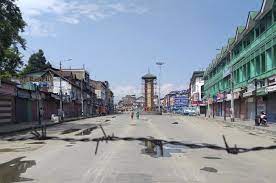 The BJP government claims that by taking away Kashmir’s special powers and integrating it with the rest of India, it will be able to bring the region at par with other Indian states and strengthen national unity.

A sudden change in Indian state narrative of normalcy in IIOJK has been observed along similarly a rise in Cordon and Search Operations on the false pretext of surge in target killings of Hindu settlers by Indian occupational forces has also been noticed.

Indian media has also started a propaganda campaign along with Indian security forces peddling news regarding seizures of large caches of sophisticated small arms used in target killings. It is interesting to note that in recent past Indian media was bolstering the false claims by Indian government that Kashmir has returned to normalcy after revocation of Article 370 and 35-A in August 2019.

However, the current actions by Indian military in IIOJ&K contradicts previous Indian claims. On 22 May 2022, Indian government has granted approval for the construction and up gradation of temporary camps of CISF and CRPF in Jammu and Kashmir.

The reason behind this new plan included so-called “militant attacks” on the camps of central forces, according to the Indian government. On 23 May Indian media reported that J&K police has recovered 15 pistols, 30 magazines, 300 rounds and one silencer from Srinagar. Indian authorities instantly levelled allegations on Pakistan for its involvement in cross border terrorism in IIOJK. It is pertinent to mention the statement of Ex-GOC 15 Indian Corps Lt Gen D P Pandey who had earlier claimed that Indian armed forces have completely seized infiltration from Pakistan.

Indian government has also deployed additional 12,000 paramilitary troops and hundreds of Jammu and Kashmir Police personnel, with the help of drone cameras, to guard the Amaranth Yatra which is scheduled to begin on June 30. These developments have come in the backdrop of implementation of the Delimitation Commission final report, a blatant Indian move to politically manipulate the electoral process for future elections.

Indian government has already converted Kashmir into a military-state. Currently, India maintains almost 1 million troops in Kashmir, making it the most militarized zone in the world, which have been involved in crimes against humanity. Indian Security Forces operate with impunity in IIOJ&K. The draconian security laws, e.g. Jammu and Kashmir Public Safety Act 1978, The Armed Forces Special Powers Act 1990, Prevention of Terrorism Act 2002, give extraordinary powers to Indian security personnel to shoot and kill unarmed civilians. These infamous laws encourage the use of lethal forces in IIOJ&K against innocent people.

Human rights abuses in IIOJ&K range from mass killings, enforced disappearances, torture, rape and sexual abuse to political repression and suppression of freedom of speech. The ultimate goal of the Modi-regime is to put in place puppet government in Kashmir which would justify the Indian illegal actions, including delimitation, demographic changes, and illegal merger of IIOJK vis-à-vis India, in violation of international law and UNSC resolutions. People of Kashmir will never compromise on their right to self-determination and subjugation to the occupied forces.