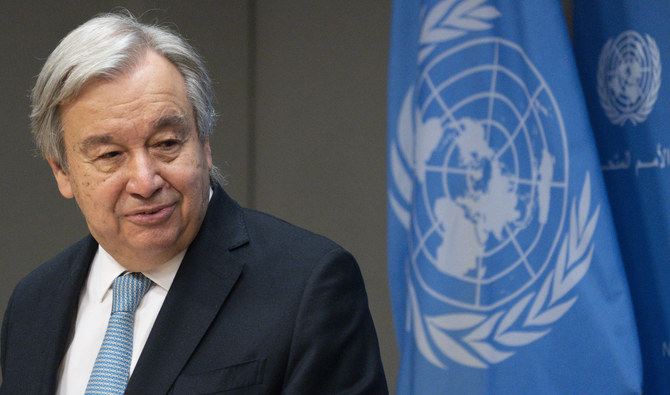 New York: The war in Ukraine threatens to unleash an unprecedented global wave of hunger and destitution, UN Secretary General Antonio Guterres said. While it is the vulnerable who are currently the worst affected, no country will be spared the effects of the cost-of-living crisis, he added.

Although he said the solution to the crisis ultimately lies in ending the war, Guterres called for two immediate courses of action. Firstly, the release of millions of tons of stockpiled Ukrainian grain to world markets, along with exports of Russian fertilizer, which are currently being withheld.

And secondly, efforts to ensure that resources are immediately available to help the poorest countries and communities cope with the crisis.

“Governments must be able to borrow the money they need to keep their economies afloat and their people thriving,” Guterres said during a press conference in New York to mark the publication of the latest report by the UN Global Crisis Response Group on the ways in which the war in Ukraine is affecting other countries.

“Today’s report makes clear that the war’s impact on food security, energy and finance is systemic, severe and speeding up,” he added.

“It is amplifying the consequences of the many other crises the world faces: climate, COVID-19, and the severe global inequalities in the resources available for the recovery from the pandemic.”

Food prices have skyrocketed since the conflict began and have reached near-record highs. In addition, the cost of fertilizer has more than doubled, sounding alarms all around the world.

“Without fertilizers, shortages will spread, from corn and wheat to all staple crops, including rice, with a devastating impact on billions of people in Asia and South America, too,” Guterres warned.

Meanwhile, he added, record high energy prices are causing blackouts and fuel shortages worldwide, especially in Africa, as the escalating effects of “the financial squeeze” are particularly badly felt in poor nations that were already reeling from the risk of debt defaults and economic collapse as a result of COVID-19, the inequality of recovery from the pandemic, and the climate crisis.

“Now, both countries and individuals have no hope of balancing their budgets,” Guterres said. “Instead, families everywhere are being forced into impossible decisions: Whether to shut down their businesses, sell their livestock, or take their children out of school.”

“In reality, there is only one way to stop this gathering storm in its tracks: The Russian invasion of Ukraine must end,” said Guterres.

“The death and destruction must stop. A political solution must be found in line with international law and the United Nations Charter.”

In the meantime, Guterres said he has asked Rebeca Grynspan, the secretary-general of the UN Conference on Trade and Development, and Martin Griffiths, the UN’s humanitarian chief, to coordinate on assembling a task force to provide the safe and secure export of food and crops from Ukraine via the Black Sea, and to ensure global markets have unimpeded access to the supply of Russian fertilizers.

“This deal is essential for hundreds of millions of people in developing countries, including in sub-Saharan Africa,” Guterres said.

“At this point, saying anything more in public would jeopardize the chances of success and I ask for your understanding,” he added, as he declined to take any questions.

“This is one of those moments when silent diplomacy is necessary — and the welfare of millions of people around the world could depend on it.” APP

Immigration challenges facing US at southern border are ‘beyond anything...